The Together! with Eastside Community Heritage exhibition took place at the People’s Gallery and Museum of Newham, 306 High Street, Stratford, London E15 1AJ from 1-13 September 2012. All disabled artists living or working in Newham were invited to submit one piece of work each, with guaranteed acceptance for exhibition. 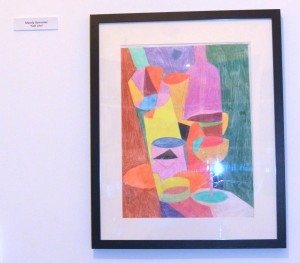 Mandy Bannister. “Still Life”. Chalk pastel. 29.5cm x 42cm.
Mandy is a Mental Health Service User and volunteers for Active Plus and INUF. Mandy’s vibrant personality is reflected in her colour choices for her artwork. 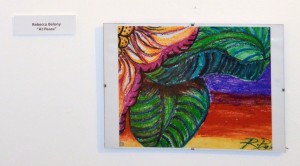 At Peace by Rebecca Belony

Rebecca Belony. “At Peace”. Photographic print from chalk, watercolour and felt pen. 30cm x 22cm.
Rebecca is a Deaf art student and member of Active Plus. 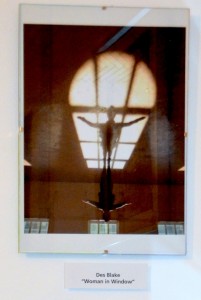 Woman in Window by Des Blake

Des Blake. “Woman in Window”. Photograph. 30cm x 22cm.
Des is a Dyslexic artist, and is also a disability rights activist. The picture was taken in the upper hall at Ithaca House, where INUF and Active Plus are based. 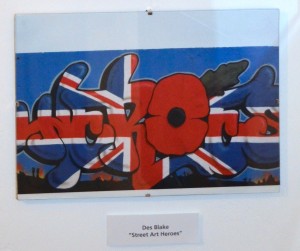 Des Blake. “Street Art Heroes”. Photograph of spray painting: original artist unknown. 30cm x 22cm.
This image was created on a section of the Greenway near West Ham. It lasted for two days from 11/11/11, and then another image was sprayed over the top. 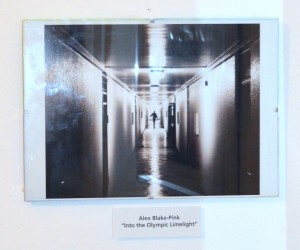 Into the Olympic LImelight by Alex Blake-Pink

Alex Blake-Pink. “Into the Olympic Limelight”. Photograph. 30cm x 22cm.
Alex is a performing artist who enjoys acting, art and photography. He is very outgoing and is a natural entrepreneur. 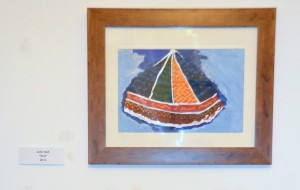 John Bull. “Tent”. Painting. 2012. 42cm x 34cm.
I was born in Stratford and have lived there ever since. I attend the Arts & Crafts group at the Grassroots centre at Memorial Park in West Ham, and enjoy the social activities there too. The group inspires me, and I have sold a few works. 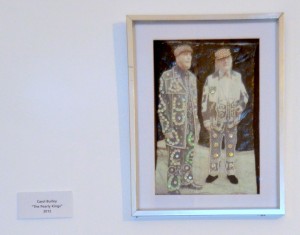 The Pearly Kings by Carol Burley

Carol Burley. “The Pearly Kings”. Collage/Embroidery. 2012. 30cm x 37cm.
As an East Ender, the rich history of the Pearly Kings and Queens has inspired the direction of my work. I am proud of this old tradition and historical aspect of London. Prior to attending the Greenhill Centre, where the Grassroots group started, I worked in the makeup factory in Canning Town. My work has also been exhibited at the Festival of Quilts in Birmingham from 2008-2012. 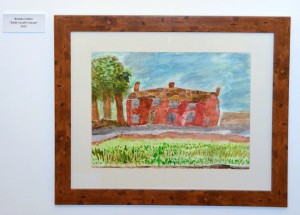 Brenda Cohen. “Edith Cavell’s House”. Drawing/painting. 58cm x 48cm.
I have lived in East London all my life, and attended Robert Montifiore School in the 1960s before working in an office. I discovered my love for art late in life, and now attend classes three times a week and have sold a few of my works. This piece is inspired by nurse Edith Cavell, who trained at the Royal London Hospital, and who was executed by the Germans for treason in 1915 after helping hundreds of soldiers to escape from occupied Belgium. 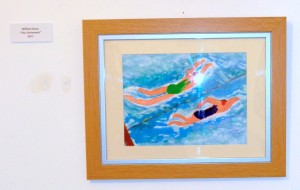 The Swimmers by William Davy

William Davy. “The Swimmers”. Drawing/painting. 2011. 48cm x 39cm.
This work responds to the Paralympic Games. I am partially sighted and formerly worked as a Gym Instructor. I live in Plaistow, and am the Chairman of East End Hamlets, an independent group of disabled artists. We formed the group after the Greenhill Centre closed, and meet twice a week at the Grassroots centre at Memorial Park in West Ham. 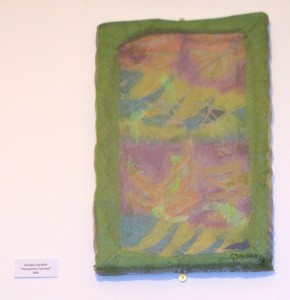 Georgia Drysdale. “Transparent Concrete”. Textile. 2006. 64cm x 40cm.
I was born and educated in East London, and my personal mantra is “My Creativity is as Unlimited as the Sky”. I believe that everyone is creative in their own unique way, whether it be creating a loving presence as a parent or writing a song. The development of my art is two-fold: personal exploration; and sharing with others. 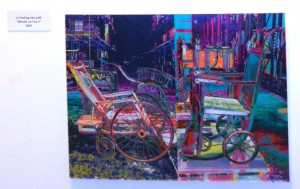 Wheels on Fire 3 by Ju Gosling aka ju90

Ju Gosling aka ju90. “Wheels on Fire 3”. Plexiglass. 2003. 50cm x 38cm.
Wheels on Fire 3 comes from a series of six pieces that were originally created as projections to accompany a performance commissioned by the Science Museum. I have lived and worked in Canning Town for most of my adult life, and am proud to identify and be identified as a disabled artist. You can see more of my work at www.ju90.co.uk 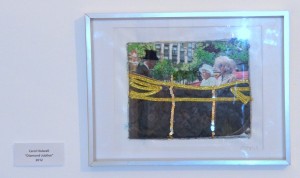 Carol Holwell. “Diamond Jubilee”. Collage/embroidery. 2012. 43cm x 30cm.
This piece responds to the Diamond Jubilee. I am an East Ender and have been inspired by the rich tradition of this area. I enjoy swimming as well as the Grassroots arts and crafts group. 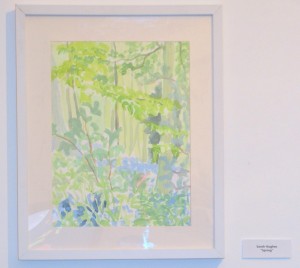 Sarah Hughes. “Spring”. Painting. 40.5cm x 30cm.
Sarah has painted a lot of woodland scene pictures while out rambling. She loves being outside, and she is interested in capturing the lighter shades that help construct a picture. Sarah is a Service User and volunteers for Active Plus and INUF. 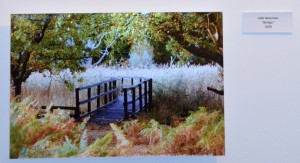 Julie Newman. “Bridge”. Plexiglass. 2009. 45cm x 30cm.
This photograph was taken from an island in the reed beds at Holton Lee in Dorset, which is fully accessible to wheelchair users. The bridge opens up the natural world to disabled people, reflecting the fact that many of the barriers which disabled people face can be overcome with a little thought and effort. I am a keen photographer and documenter. I live in Upton Park, and have a studio by the Thames at Trinity Buoy Wharf. 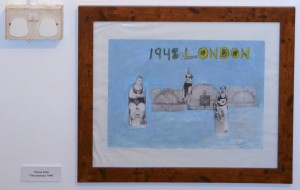 The Olympics 1948 by Pranau Patel

Pranau Patel. “The Olympics 1948”. Drawing/collage. 2010. 57cm x 46cm.
I live in East London and have researched the last time that London played host to the world. I am interested in what took place then, and how the Games have evolved over the years. 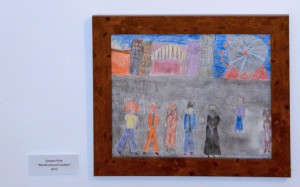 Sandra Pink. “Multicultural London”. Drawing. 2012. 41cm x 34cm.
Canning Town, where I have lived all my life, is a melting pot as this piece represents. I worked in a bag factory in Greengate for a number of years, and then attended the Greenhill Centre in Manor Park. I am now a member of the East End Hamlets art group at Grassroots. My work has been exhibited at the Stratford Town Hall and Leadenhall Market, and I have also sold a few pieces. 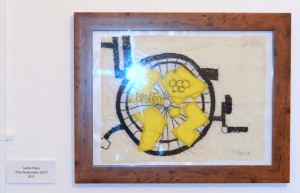 The Paralympics 2012 by Jackie Pryce

Jackie Pryce. “The Paralympics 2012”. Collage/embroidery. 2011. 47cm x 37cm.
The Games are taking place just around the corner from where I live so it is only appropriate that the work responds to this. I have been inspired by London 2012 and am proud to live in this great city. 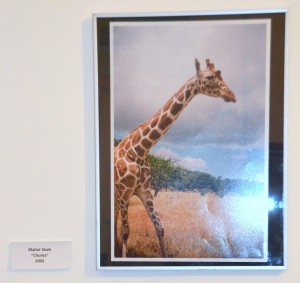 Malini Shah. “Chuma”. Photograph. 2002. 31cm x 41cm.
This is a photograph of a giraffe in East Africa who was rescued from the wild with a broken leg. Chuma means metal in Swahili, and that is what the giraffe was named after having a metal splint put into his leg. I am a young visually impaired photographer who is currently working in Newham. My work reflects what I see in the world around the world and my responses to it. 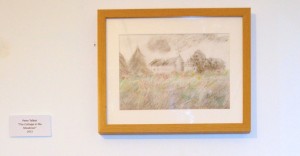 The Cottage in the Meadows by Peter Talbot

Peter Talbot. “The Cottage in the Meadows”. Drawing. 2012. 37cm x 30cm.
I was born in Lambeth and now live in the East End. I worked as a gardener at Kensington Palace several years ago, and later worked as a gardener at the Greenhill Centre which has recently closed down after many years. I love drawing, stitching and painting. The work represents an imaginary place, one that I would like to be in away from the hustle and bustle of the big city. 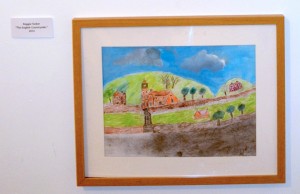 The English Countryside by Reggie Tucker

Reggie Tucker. “The English Countryside.” Drawing/painting. 2012. 52cm x 43cm.
I was born in Forest Gate and later worked as a labourer at Lucas Furniture in Bow. I enjoy going to the country when I can. As a member of East End Hamlets I enjoy the social activities and meeting friends as well as the art group. 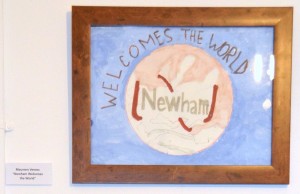 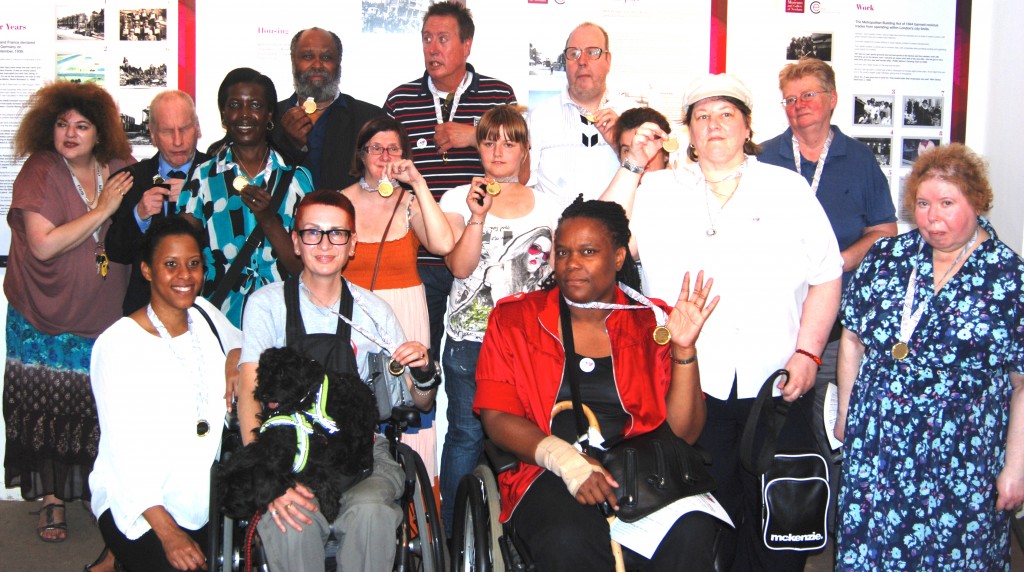 Locally based disabled artists display their Mayor’s medals at the Together! with Eastside Community Heritage exhibition private view.