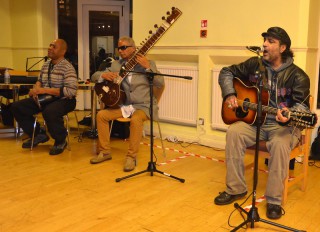 Together! 2012 CIC continued to develop in the year 2014-2015, offering a year-round programme of free arts activities for disabled people and their companions and free exhibitions, performances and events for everyone. We were able to access a second year’s funding for the Music Club from the Community Foundation, which continued at the River Centre in Canning Town with a focus on sharing music from different cultures. We were also able to extend our funding period for the Pop-Up Poetry Club from the People’s Health Trust, who also featured us on their website in January 2015. In December 2014 we published an anthology of poets’ work. 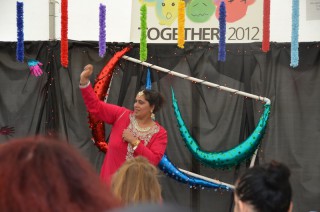 Huma Dhutt performs in the Together! tent at the Liberty Festival in August 2014

Building on the success of the Together! 2013 Disability History Month Festival, we were successful in attracting Arts Council funding for our enhanced summer programme in 2014 for the first time. This enabled us to run a series of arts workshops aimed at disabled people and their companions, and to employ guest artists to appear at our August Poetry and Music Clubs, which were relocated to the House Mill in Bow as part of the summer programme. Highlights included a two-day workshop with international musician David Jackson which finished with an improvised performance of Titanic! by the River Lea. We were also able to produce a tent showcasing the talents of locally based disabled artists in Queen Elizabeth Olympic Park for National Paralympic Day, and to create a presence for disabled people at Newham Carnival. 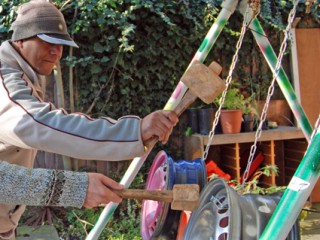 The Recycled Band was built by volunteers and trainees at the McGrath Centre for disabled people in Stratford over autumn and winter 2014, led by Together! 2012 Project Worker Cliff Segree (pictured). Photo: Julie Newman.

In September we were commissioned to create a Music Club project for Queen Elizabeth Olympic Park’s Local Programme, building 12 over-sized percussion instruments from recycled construction materials and found objects and installing these into the Park for second weekend of the February 2015 half-term. The Recycled Band was an extremely popular project, and included the McGrath Makers, a group of employment trainees with learning difficulties, within the construction. 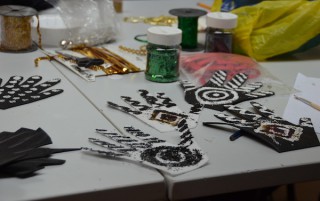 Other highlights included the launch of our Hands Project in August 2014, which highlights our common humanity, and which has included contact with the leading Chinese Disability Arts organization.