7 DECEMBER 2014 JU GOSLING AKA ju90 WRITES: Twelve months ago, following the end of our 2013 DIY Disability Film Festival, I wrote about the importance of Disability Film and our determination to return this year. And here we are, with a new home in the Old Town Hall Stratford, and support from Arts Council England, Channel 4, Countryside Properties, Trinity Buoy Wharf and London Borough of Newham.

Together! began as a summer festival and the original home of our 2012 Film Festival was a geodesic dome in London Pleasure Gardens, so our aim is to create a space where everyone feels welcome and relaxed. Where cinemas put on special ‘relaxed’ or otherwise ‘accessible’ screenings for disabled audiences, we want everyone – both disabled and non-disabled – to feel able to come and watch and discuss Disability Film throughout the weekend. Not everyone will enjoy every film, and not everyone will find 100% of every film accessible to them, but we believe that all of the films selected have merit and have something to offer everyone. We also encourage audience members to come and go as they wish (while respecting others). Where cinemas charge, we give out sweets, biscuits and soft drinks to our audience, and are happy for people to bring their own food in (so long as they take their rubbish home with them if possible).

The Will Thorne Hall at the Old Town Hall (formerly the council chamber) makes a charming arthouse cinema, with its ornate walls, high ceiling, chandeliers and Victorian acoustics, allied with a 21st-century rear projection screen and projector. Its location in central Stratford, surrounded by coffee shops, takeaways, restaurants and bars – not to mention Westfield close by – also makes it very easy to combine a weekend of film and serious relaxation with shopping (or just to send the members of the family who aren’t film fans shopping!). The vast majority of shopping in Stratford has wheelchair access, as does the East end of the Jubilee Line and all of the DLR.

And in this comfortable and convenient setting, the weekend proved that Disability Film has truly come of age. You can see each programme in full via the pull-down sub-menu from our 2014 Disability Film Festival page. We have yet to do a final count, but there were dozens of films being screened, of every length and genre, all completed in the past two years, and many of them London or UK premieres. Together they examined disability from every possible angle, beginning on Friday night with Jon Hastie and Annie Perkins’ A Life Worth Living. Jon and Annie attended in person to present this road movie, which focusses on people with Duchenne Muscular Dystrophy but has much wider significance. A Life Worth Living stresses that personal assistance and independent living are what dictate quality of life, and not physical ‘ability’. To view A Life Worth Living online click here and use the password <anecdoteALWL>

In my ‘ju90’ persona I had the rare pleasure and privilege of controlling the screenings. So often the work-related areas of ‘purpose-built’ venues are inaccessible to wheelchair users in one way or another. As with the outdoor tented sector, pop-up venues have the potential to create much more accessible arts spaces than venues with fixed seating and steps to rear areas. A kaleidoscope of films – making me smile/think/laugh/jump/sing in my head/question/challenge/challenged – were much more vivid for being seen on the big screen, albeit back to front while simultaneously watching them on a 15″ MacBook Pro and mixing the sound. I recall as an 18-year-old Film and English Studies student at UEA being told by the television studio technician that “Women vision mix.” I very much doubt this is quite what he envisioned!

But don’t take my word for it: you can also view the vast majority of the films in the comfort and convenience of your own home, via the links from the programmes to the online versions. The widespread popularity of sites such as Vimeo and YouTube mean that festivals are no longer restricted to those who can attend in person, enjoyable though that experience was. Festivals are now (at least) as much about curating an online portal where anyone who is interested can access an exciting and stimulating range of recent films. But watch them on the biggest TV you can, make some popcorn and invite round some friends.

It was particularly pleasing to see the number of filmmakers who attended in person, though, from emerging filmmakers Ellen Clark, Fay Hart and Claudia Merlini, to established filmmakers such as Gary Thomas, Dee Meaden and Max Barber. Many of these joined us for our Saturday lunchtime discussion, ‘Cripping up or creative right?’, on whether disabled actors should always play disabled characters, or whether directors should have the freedom to cast whoever they wish. Needless to say there were many different opinions expressed, but it was interesting to hear about Ellen Clark’s unsuccessful struggle to make contact with disabled actors when casting her film All I can do. 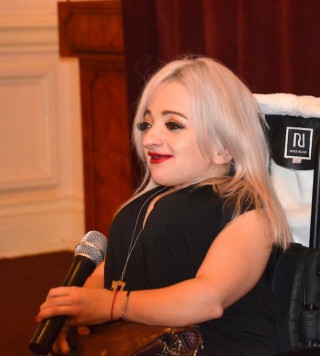 A disabled actor who impressed us all was Sam Renke, star of our Saturday night UK premiere Little Devil. (As with our Sunday night premiere of iWitness there is no online link; you will have to wait to see these films now in the cinema or on DVD.) This was Sam’s first acting role, and as she explained before the screening, the story is a highly exaggerated and fictionalised version of her own experiences when she first moved to London. Little Devil is likely to become a Channel 4 series in the future, but catch the film as soon as it’s released. Also look out for iWitness, where in a further twist on casting, wheelchair-using actor David Proud plays a non-disabled character who has broken his ankles. The theme of Hitchcock’s Rear Window is transposed to the unlikely setting of a caravan park in March 2014 and the world of of CCTV and the internet in this terrific and terrifying tale.

We were able to offer our usual two-day film-making workshop on Thursday and Friday in the run-up to the festival, led by Chris Haydon from the Community TV Trust at the McGrath Centre in Stratford, home of Starpad DJs. The resulting film, ‘Father Christmas is Unwell’, was screened at the start of our Films from the East programme on Saturday afternoon. We will continue to operate the film-making workshop at the McGrath Centre on the third Wednesday of each month from 11am to 3pm, open to all disabled people and their companions. Contact Julie Newman on julie@together2012.org.uk for more information.

And so to 2015. One initiative which emerged from Saturday’s discussion was the idea of establishing an online forum, where filmmakers (both disabled and non-disabled) who are interested in Disability Film, disabled actors, and anyone else who has a passion or interest in Disability Film can network and exchange information. We will be working with Fay Hart, Gary Thomas and Max Barber to set this up in the New Year.

Another suggestion is that we declare the weekend closest to International Day of Disabled People (3 December) Disability Film weekend in the UK. We heard much about the unwillingness of film distributors to take on films with disabled lead characters in the discussion on Saturday. Whereas television companies now have targets and quotas for employing disabled actors and filmmakers, there is no duty to promote equality placed on British cinema. We were glad that some connections were made that should assist some of our films at least getting a wider audience. Both Little Devil and iWitness deserve to be in the London Film Festival and in our cinemas. We will be developing the ideas put forward during the festival further in the near future, and will also explore the possibility of offering our festival programme to regional partners, replacing our Saturday afternoon ‘Films from the East‘ session with their own local films.

Thanks go to all of the filmmakers and everyone else who supported the festival; our funders; our programming partners Film on Film Entertainment and 104 Films; Chris Haydon; Taylor Henville for creating the programme notes; Sound Induction Systems Ltd for supplying the audio-description kit; organising team members Julie Newman, Carla Aveleira, Hamish Graham and Sarah Hughes from Together!; and of course the staff of the Old Town Hall Stratford.