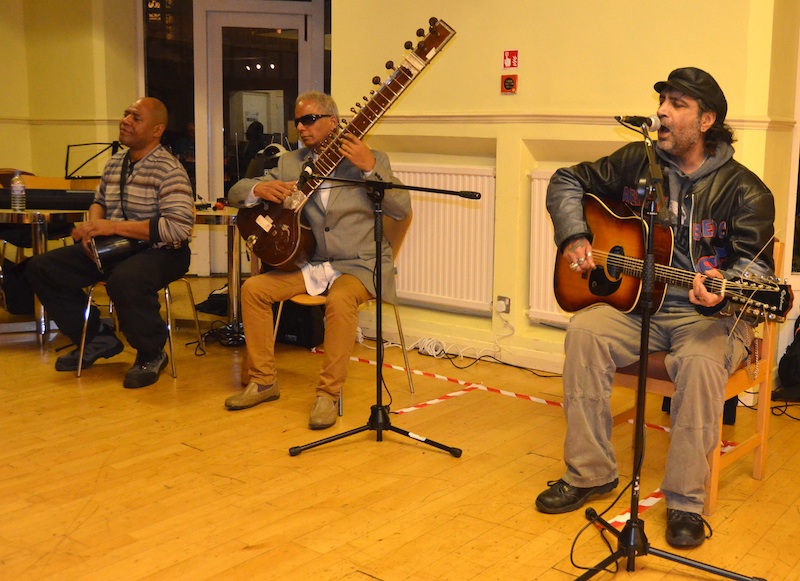 2 DECEMBER 2014 JU GOSLING AKA ju90 WRITES: Last night guest artists Kate Portal and Baluji Shrivastav played at the Together! Music Club as part of the Together! 2014 Disability History Month festival, thanks to funding from Arts Council England and the Community Foundation. Both artists happen to be blind, but the focus of the evening was on World music.

The Music Club meets on the first Monday of each month, as well as organising rehearsal groups and special projects. I wrote more about the background to the Club last year in my Director’s Blog. Our funding from Community Foundation this year has been provided so we can continue to share music from the different cultures that we come from, Newham being the most multicultural community on the planet.

Despite struggling with a cold Kate played a set that was instantly engaging, introducing the Club to a range of traditional songs from the British Isles. This included Sydney Carter’s song about London’s sewers ‘Down Below’ from the 20th century, which got everyone giggling as they sang along to the chorus. Baluji thrilled the Club with his introductions to traditional Indian instruments, and had everyone joining in with Hindi lyrics as well as playing a multicultural version of Jingle Bells. As always, we also had our Open Mike performers including Steve Karim, Pamela Hicks, Sarah Hughes, Glory Sengo and Ellen Goodey.

Newham is extraordinarily short of live music venues at present, despite having a population of around 300,000 people. Google shows just three pubs with occasional live music in E16, where the Music Club is based, and two small venues, neither of which are particularly accessible. There is nothing comparable to the Music Club, where instruments are provided and the emphasis is on participation and making music together. No wonder we still have the lowest level of arts engagement in the UK, something that Together! 2012 CIC is working hard to change.

We are particularly pleased that, with our festival, we are able to bring national and international artists into the community for the benefit of disabled people, local residents and visitors alike. Our intimate ‘pop up’ settings enable closer contact between artists, participants and audience members, while the smaller scale of the events make them accessible to people who have little previous experience of the arts, and who would never usually have the opportunity to meet and interact with professional artists.

Our events also echo the gatherings held by the late David Morris, who continues to inspire our work. In the 1920s these might have been called ‘salons’, and in the 1960s, ‘happenings’. In 2014 we come ‘together’ to celebrate the creativity in everyone and international friendship, as well as excellence in the arts. No doubt we will need to find larger venues in the future, as our audience finds it easier to get out and more people become aware of the quality of the artists participating — but the spirit will remain the same.