9 DECEMBER 2014 JU GOSLING AKA ju90 WRITES: Today was Local History Day, organised by the Newham Disabled Reps Forum led by Sarifa Patel and Christine Dolyak. (Both artists themselves, Sarifa has work in our forthcoming book ‘Poems from the Together! Pop-Up Poetry Club’, which is being launched on Monday 15 December at the Hub in Canning Town – see the festival programme for further details – while Christine has work in our Open Exhibition at the Old Town Hall Stratford.)

The first speaker was Richard Rieser, one of the national Disability History Month organisers, on this year’s theme ‘War and Impairment: the Social Consequences of Disablement’.  You will find references to the theme throughout our 2014 festival, including: 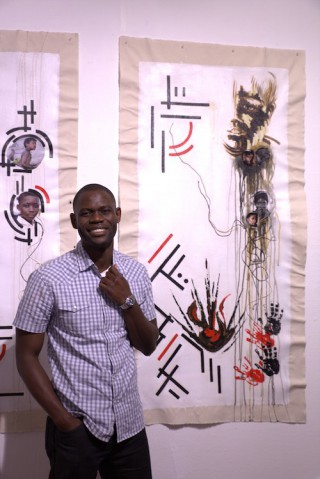 Cedoux Kadima’s solo exhibition ‘Home and Memories!’ at the Hub explores the impact of war and abuse on the children of DR Congo

War is of course one of the biggest causes of disability worldwide (along with poverty, pollution and poor working conditions), and can lead to any type of impairment. We rightly hear a great deal about the difficulties being experienced by disabled veterans, but much less about all of the civilians affected by war, including those forced to leave their homes and flee. Many refugees who were not injured by war become disabled as a result of the conditions they then face, without access to clean drinking water and sanitation or proper nutrition, medicines and medical treatment.

A substantial number of disabled people escaping war end up in the UK, where conditions have never been poorer for refugees. Contrary to tabloid reports, refugees can spend decades living on the margins, without the right to work or claim housing and benefits, and may eventually be deported to begin the whole process again elsewhere – or be forced to return to their home countries, where they often face death. No wonder that most of these displaced peoples end up with long-term mental health conditions, which may be in addition to war-related impairments.

The Disability History Month organisers are calling for solidarity between the disabled people’s movement and all of those disabled by war. I know from past conversations with the Royal British Legion that they recognise the need for veterans to link up with their local disabled people’s organisations (DPOs), both to receive support and to fight for disability rights and equality. Many refugees are also already involved in DPOs, particularly in urban areas such as Newham, the second most deprived borough in the country. But as a disabled people’s movement, we also need to recognise the need to reach out to disabled veterans – huge numbers of whom are homeless – and to refugees – many of whom are without any form of income – not on our terms, but on theirs. Lest we forget, US veterans from Vietnam were responsible for the beginning of the modern disability rights movement. Today we have a lot to learn both from our own veterans and from refugees. “Together we are strong.”