UK Disability History Month officially starts today, focussing on The Portrayal of Disability: Then and Now. In fact, though, both our festival and the national celebrations have already begun. On Thursday 19 November I was honoured to take part in a day-long conference on the Portrayal of Disability in Mainstream Moving Image Media: Then and Now at the British Film Institute at the Southbank Centre. Organised by Richard Rieser, the national Disability History Month co-ordinator, this fascinating conference started by looking back at the portrayal of disability since the beginning of film, and went on to look at contemporary issues from the varying perspectives of actors, writers, producers and directors. All concluded that far too little had changed since the early days of film, and that action needed to be taken, particularly given Article 8 of the UN Convention on the Rights of Disabled People, which commits governments to producing positive images of disabled people and raising awareness of our talents and skills, and Article 30, which gives disabled people equal rights to access the arts.

One of the many strengths of the conference was that it forefronted all diversity issues within filmmaking and broadcasting and in particular race and gender, rather than viewing disability in isolation or as a medical/charitable issue. There was a strong demand from both speakers and audience members for the introduction of quotas for publicly funded film and broadcasting, so that both the workforce and the work produced reflects the fact that at least one in five of the UK’s working age population are disabled. There was also an agreement that all publicly funded filmmakers should create audio-described and captioned versions of their work, and should actively consider if they can produce a BSL version.  In addition to a packed room the conference was live-streamed, and will remain online on the Disability History Month website (I was on the final panel of the day with the producers and directors). 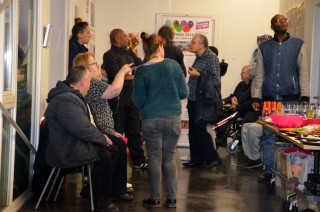 On Friday 20 November we launched our own Together! 2015 Disability History Month Festival with a Not-so-Private View of our Open Exhibition at the Hub in Canning Town. Unbelievably, this is already our fourth annual Open Exhibition, bringing together work by amateur, community, semi-professional and professional disabled artists, all of whom have a Newham connection. We ask each interested artist to submit one piece of work, with guaranteed acceptance so long as it is suitable for a family audience. This unique approach always creates a vibrant show with an energy all of its own – last year’s exhibition was seen by more than 30,000 people. We were delighted to welcome London Live earlier in the day to film, and to welcome many of the exhibiting artists to the party in the evening in addition to other guests. The 2015 Open Exhibition remains at the Hub (usually open 7 days a week from 9am to 9pm) until 15 January 2016 before touring. 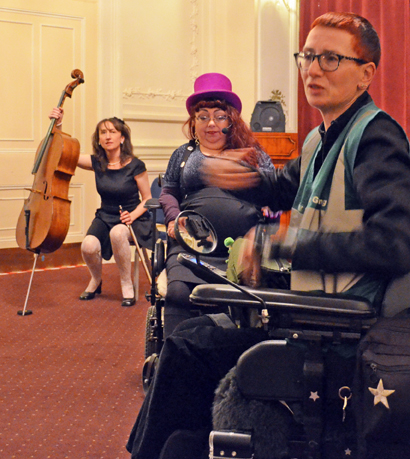 (L to R) Jo-anne Cox, Penny Pepper and Ju Gosling at the end of Lost in Spaces at the Old Town Hall on 21 November 2015

Yesterday, 21 November, the first of our performances took place, with Penny Pepper bringing her acclaimed show Lost in Spaces to the Old Town Hall Stratford for the last date of its national tour. Penny’s show, directed by Fringe First winner Bethany Pitts, told the story of her life from the 1960s to the 1990s in a masterful blend of music, song, spoken word and film. Ranging from special schools and the struggle to be allowed to live independently to Penny’s professional career, first as a singer and later as a writer and performer, this was an unmissable tour de force. Penny was accompanied by cellist Jo-anne Cox, who returns to the Together! festival in her own right on Monday 7 December at the Together! Music Club (River Centre, 7-9pm, see the Events Calendar for full details). We were delighted that The Stage published an interview with Penny the night beforehand, which also highlighted the festival as a whole. Penny is currently crowdfunding for a limited first edition in hardback by Unbound of her memoir First in the World Somewhere, which will be published in trade paperback by Penguin.

As always, the Together! festival could not have been produced without the work of many individuals and organisations. Our main funder, Arts Council England, is supporting us for the third year running, and we have also been supported by contributions from London Borough of Newham’s Let’s Get the Party Started programme, Trinity Buoy Wharf, Countryside Properties and Davenport Events and Venues Management. Numerous artists, organisations and venue workers have assisted with the practicalities and logistics of the programming, while suppliers have worked hard to ensure we have everything we need in good time. Our core team, including key volunteers, have yet again risen to the challenge of producing a month-long festival without a base, which inevitably creates a number of additional difficulties. What makes it all worthwhile is the enthusiasm from both artists and audience members alike for a disabled-led festival that is open to everyone and continues to celebrate Newham’s role as the main Paralympic Host Borough. Three years after the Games, we are well on our way to our goal of making East London into an international centre of excellence for Disability Arts despite – to date at least – any of the resources that were promised for the Paralympic Legacy. Fortunately, our greatest resources remain the talents, passion and commitment of disabled people ourselves.

Next: Art from the heart