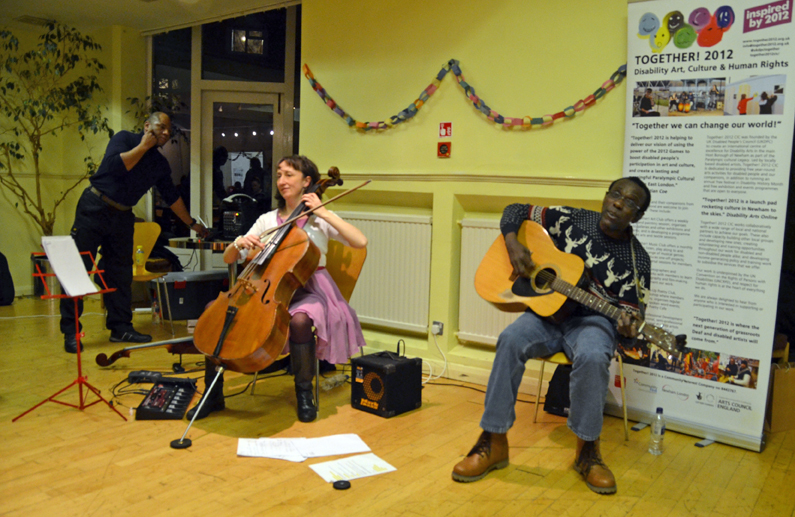 Jo-anne Cox and Walton McLaren perform at the Together! Music Club on 7 December 2015

Tonight, as on the first Monday of most months, my spirits were lifted at the Together! Music Club, which ran from 7-9pm at the River Centre in Canning Town. Church-owned, as many of the available community venues are (the only arts venues in Newham are in the far north, in Stratford), this is a cheerfully crumbling but striking hotchpotch of buildings which is soon due to be rebuilt around the building’s users. These are many and varied, and include a nursery and after-school club as well as the fashion college and design company Caramel Rock. Close to Canning Town station, the space we use looks over an enclosed garden, which makes a pleasant change from the urban environment surrounding us, and to date we have never had a noise complaint despite not knowingly ever being quieter than we feel the music deserves.

I suspect that one reason for this is the fact that for access reasons we are an early evening club. This is at least as much due to many participants’ lack of support to go out as it is to health reasons – we have many more disabled people wishing to attend our events than are ever in the audience, despite every activity we produce being free and accessible. The reality is that growing numbers of vulnerable adults are not leaving their homes apart from to access official services, and are not going out in the evenings at all, not least because of lack of income. Unsurprisingly in such a densely populated and low-income area of London, a significant number of these people are artists of every kind and from every impairment group. I can’t remember when it was that the Brighton-based punk band Heavy Load launched their Stay out late campaign, to stop disabled people from being forced to go home from gigs at 9pm. However, now we are fighting for disabled people’s access to a social life after 6pm – or for many people with learning difficulties, after 3pm when their segregated provision ends. One of the many frustrations of not having our own base in a sea of empty buildings is not being able to make better use of volunteers, but in this case it would only make a partial difference.

For those who were present, though, cellist Jo-anne Cox and singer-songwriter Walton McLaren created a magical musical evening. Since 2010 I have witnessed Jo-anne grow from an accomplished orchestral player and accompaniest into a stylish, confident soloist, and it was a great pleasure to have her return in her own right after accompanying Penny Pepper in Lost in Spaces on 21 November. Playing both the electric and acoustic cellos, we were swept up in Jo-anne’s music when she played solo, and thrilled when she invited us to play along. (The Music Club is first and foremost a participatory club, with percussion instruments provided and ‘open mike’ slots playing a key role.) Meanwhile Walton McLaren brought his own sparkle to the stage with his original material, and included us all including Jo-anne in singing Bob Marley and other covers.

Looking back over my blog entries for the 2013 and 2014 Together! Music Clubs, I am very proud of how a small local club has been able to host a number of national and international disabled artists, as well as developing significant projects in its own right (the two achievements no doubt being connected). Last February saw the launch of our most important project yet, The Recycled Band, installing 12 giant percussion instruments made from recycled construction materials and found objects into Queen Elizabeth Olympic Park at half-term. This project was enormously popular with visitors, and we subsequently took some of the instruments to the awards ceremony for a schools recycling competition and to the Richard House summer fete, where they were equally well received and where we also helped families to make their own recycled instruments. Next year we hope to develop the project further, underlining our message that music is for everyone. 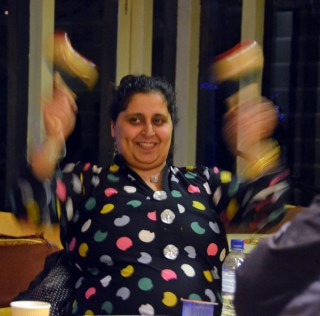 The Together! Music Club was funded for the first two years by the Community Foundation, now closed, with the Arts Council having funded guest artists, and the LLDC Local Programme (now also closed) funding The Recycled Band. We are currently seeking sponsors to ensure that we can continue with this very important project. Not only does the Music Club create valuable creative and social opportunities for local residents and disabled people; it also provides a model that can be used in other areas where arts engagement is extremely low and the challenges are many. We need funds to pay for venue hire, provide refreshments, meet volunteers’ expenses and other running costs. Please contact me on ju@together2012.org.uk if you can help with funding or in-kind support to secure the future of the Together! Music Club.

Next: History, Culture and Community