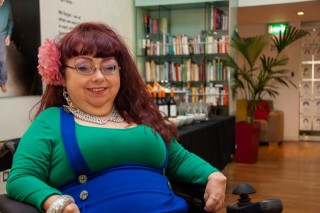 A workshop looking at language, it’s power and the ways of magic within. As the year draws close to the shortest night, do you dare travel into the forest, away from the light? Dare you meet the Holly King and what will he tell you? Perhaps you’ll ride through the snow with Freya, Goddess of the North, in her chariot of cats, or the one eyed Odin, hanging from the Tree of Life. Will you find the wounded healer – maybe Bridget, Goddess healer of all – within yourself or hiding in the crevice of a winter bare tree?

We will explore techniques of the written and spoken word and create pieces to perform or meditate on. There’ll be objects to inspire – an ancient amulet, a crystal, a leaf – and if you choose, bring your own object to share. Through poetry and flash fiction we’ll explore the magic of word, create our own mantras, celebrate our identity and ride the wheel of the year as it turns to sleep in preparation for the promise of Spring.

A genre-defying and versatile writer, Penny Pepper’s work examines difference, diversity and identity.  She subverts labels, breaks barriers and surprises at every turn. She wrote the taboo-breaking book Desires Reborn in 2012 and in 2013 she won a Creative Future Literary Award. In September 2014 her one-woman spoken word show, Lost in Spaces, premiered to great reviews at Soho Theatre. It toured the Midlands in 2015, after launching the Quality Writing for All Campaign for The Literary Consultancy, and was a highlight of the Together! 2015 Disability History Month Festival.

As a performance poet, Penny has performed across the UK, including London, Edinburgh and further afield in New York. Besides guest slots on BBC 4, BBC Radio 4, Newsnight, Sky News, Radio5Live Hitlist, she writes regularly for The Guardian. Penny is near the end of writing a one-of-kind memoir First in the World Somewhere recalling her early years in London as a young, passionate punky writer, poet, singer and disability activist which will be published in September 2017 by Unbound.