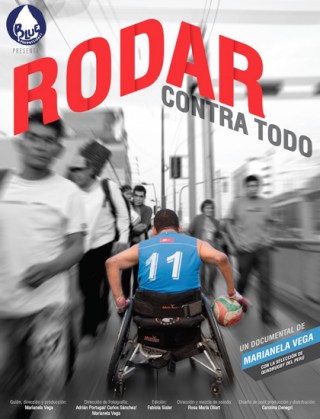 Our opening night pays tribute to the anniversary of London 2012 and the Rio 2016 Paralympics. ROLLING STRONG is a feature-length documentary film that tells the story of the first wheelchair rugby team in Peru. They are a group of men and women from different cultural and socio-economic backgrounds who got together three years ago to play a new sport of which they—and their whole country—knew little about. The film follows them for two years, showing their process of coming together as a team, the excitement of their first international tournaments and the goals, dreams and motivations that guide their everyday struggle on and off the court. In Spanish with English subtitles.

We’re the Superhumans. Katherine Araniello. 2016. 2:57. “An Olympics trailer I can finally relate to.” “Now at last an Olympics trailer to be proud of.” Channel 4’s Rio Paralympics 2016 ‘Yes I can’ trailer won acclaim around the world, but criticism from a diverse range of disabled people. For many who saw it, the trailer’s message that any barrier could be overcome with enough determination echoed the accusations of laziness and defective personalities they’d endured from disabilist abusers for decades. In her gentle absurdist parody, Katherine Araniello shows Channel 4 how it should be done. Available to watch online at https://vimeo.com/179661087 The lyrics for the Channel 4 song are at http://genius.com/Channel-4-uk-paralympic-broadcaster-were-the-superhumans-rio-paralympics-2016-trailer-lyrics