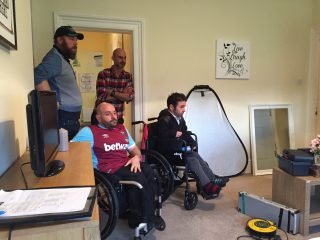 104 Films production of The Alarm, by David Proud.

The Together! 2018 Disability Film Festival is delighted to open with the world premiere of Justin Edgar’s ground-breaking feature documentary The Social Model. The Social Model explores how Disabled people are portrayed as victims, villains or martyrs in film and television, and how non-disabled filmmakers and actors have exploited negative depictions of impairment to win awards and gain stardom. The film examines the emerging grass roots Disability Film movement in the UK, and how Disabled people are fighting back against outdated and outmoded portrayals of disability. 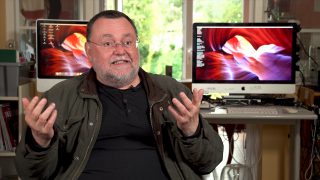 “59 non-disabled actors have earned Oscar nominations for playing disabled characters. History suggests that an Oscar-nominated actor in a physically or emotionally afflicted role has nearly a 50 percent shot of a win” (Indiewire)

“14% of people in employment aged 16-64 considered themselves disabled. However, the 2016 Creative Skillset employment census shows that only 0.3% of the total film workforce are disabled.” (Office of National Statistics)

The Social Model has been created as part of the #MakeFilmEqual Campaign launched by 104 Films, which calls for greater equality for Disabled talent in the film industry. 104 Films is the UK’s leading production company for the development of Disabled filmmakers (see below). The campaign is fuelled by the growing movement for more representation, recognition, funding & development of Disabled talent. The Social Model has been supported by a crowdfunding campaign which is ongoing, in order to make the film as widely available as possible and support an accompanying educational campaign. https://www.indiegogo.com/projects/makefilmequal#/

104 films was established in 2004 with the aim of creating a tectonic shift in the representation of Disabled people both in front of and behind the camera. (See the Guardian https://www.theguardian.com/small-business-netw…104 films have co-produced critically acclaimed award-winning films such as the BAFTA nominated Notes on Blindness and I Am Breathing, plus the multi award winning Special People which was hailed as a “Milestone in Mainstream Cinema” by the Guardian for its use of disabled cast. 104 Films were also involved with films such as Sex & Drugs & Rock & Roll, and the searing documentary Unrest which was shortlisted for the 2018 Best Documentary Oscar. 104 Films is currently making the first ever film by a Deaf director entirely in sign language: Retreat for the BBC’s ifeatures programme.