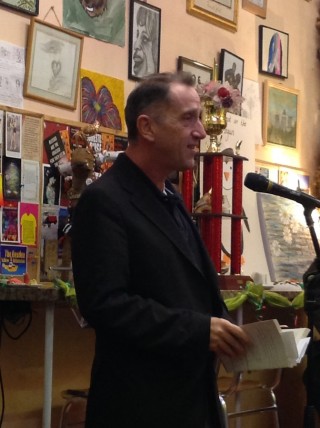 John O’Donoghue reads from his memoir Sectioned: A Life Interrupted at the Pop-Up Poetry Cafe at the Garden Cafe in Custom House on 16 December 2013.

Artistic Director Ju Gosling aka ju90 writes: Our last but one event on our 2013 festival calendar was last night’s Pop-Up Poetry Café at the Garden Café in Custom House. We launched the Pop-Up Poetry Café in September, with funding from People’s Health Trust, and it takes place on the third Monday of each month from 7pm. The Café allows participants in our weekly poetry workshops to practice their performance skills, as well as providing a welcoming and accessible social space for disabled people and their companions.

We launched our poetry project during our 2012 Disability History Month festival, with support from East London NHS Trust. Over a week last November, Cooltan Arts from Southwark provided tutors in writing, performing, publishing, illustrating and pod-casting poetry, resulting in a reading at the Garden Café on the final Saturday. It was a pleasure to see the progress that participants in last year’s workshops had made over the last 12 months, as they performed their own poems last night.

It was also a pleasure to welcome guest poets John O’Donoghue and Allan Sutherland to read to us, funded by Arts Council England. John’s memoir Sectioned is a previous Mind Book of the Year, and John has also chaired Survivors Poetry and been involved in Green Ink Press. Allan is the historian of the UK Disability Arts movement, as well as being a respected poet. John read from Sectioned as well as giving us a preview of his forthcoming book-length narrative poem, while Allan read poems about his experience of epilepsy as well as his love for his partner Victoria.

We were particularly pleased that Allan and Victoria had been able to reach us by public transport from Brixton, although Victoria is a wheelchair user. Newham is unique in having two fully accessible lines, the DLR and the Jubilee – although, of course, in common with most of London, many stations further afield on the Jubilee Line are not accessible. Newham have always been well-served by bus routes too, and there are connecting bus stations at Canning Town and Stratford.

Visitors to our activities from across London often remark how much easier it has been to reach us than they expected. We obviously take the location of the nearest accessible public transport into account when choosing our venues, but generally Newham is not the distant place of many people’s imaginings. Rather, as Dickens wrote of Canning Town, we are “Londoners over the border” – over the River Lea, that is, which once formed the old Metropolitan boundary between London and Essex.

We hope that our future festivals and summer programmes help to encourage visitors to come to Newham — and then to come back. As the last four weeks have shown, we not only offer a wonderful programme of activities, but also an old-fashioned East End welcome to all. We live and work here for a reason, and look forward to sharing the benefits of Newham with an ever-larger number of visitors in the future.