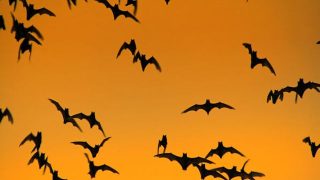 Mas Carnival Bat artists study real bats before they make up the dances that they perform in the parade. Why not make up your own Bat dance wearing your Bat mask and wings? Post videos online using the hash tag #kitchencarnival and/or send them to us to include in our film for Hackney Carnival Online 2021 info@together2012.org.uk

Bat-themed songs you could dance to include Bats (My Little Pony); Bat out of Hell (Meatloaf) and Release the Bats (Birthday Party).

Bats have often been misjudged by humans. Bats have been associated with vampires and horror movies; been wrongly described as ‘flying mice’; been used as a metaphor to insult visually impaired people (‘blind as a bat’ – in fact bats can see well) and people with mental health difficulties (‘batty’, meaning ‘bats in the [church bell-tower] belfry’ or unwelcome intruders in the head); and now bats have been blamed for Covid-19. Bats are fundamental to the health of the environment, but have been so disrespected that half of all bats face extinction due to their habitats being destroyed. This is why bats have had to move into buildings and cities, where they can come so close to farm animals and humans that their diseases can be shared.

Click here to download an A4 PDF with photos of real bats and Bat Mas characters in Trinidad and Tobago.