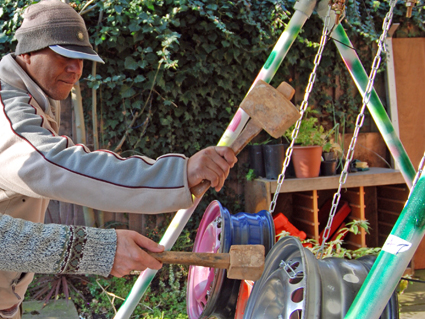 The instruments have been built by volunteers and trainees at the McGrath Centre for disabled people in Stratford, led by Together! 2012 Project Worker Cliff Segree (pictured). Photo: Julie Newman.

The Recycled Band is usually available for installation at festivals etc. Click here to learn how to make your own recycled percussion instrument.

Over winter 2014/15, the Together! Music Club worked with the McGrath Makers in Stratford to create 12 over-sized percussion instruments made from recycled construction materials and found objects. The instruments were installed in the South Plaza of Queen Elizabeth Olympic Park for the last weekend of half-term (21 & 22 February 2015) for everyone to play with. On Sunday 22 February 2015 at 2pm the Together! Music Club gave a free concert, conducted by Tae Catford, James Rose and Cliff Segree, and featuring Together! singers Dwain Bryan and Janice Weir. Click here to view images from The Recycled Band at Queen Elizabeth Olympic Park.

The instruments were designed by Together! 2012 Artistic Director Dr Ju Gosling, and developed and created under the direction of Cliff Segree with Tracey Myers. The project was funded by the London Legacy Development Corporation’s Local Programme. It was inspired by the historical and contemporary instruments made from recycled materials and related musical cultures in South America and the Caribbean, including Paraguay’s Landfill Harmonic ‘Recycled Orchestra’. The project also responds to the Sound Garden in Christchurch, New Zealand, created by artists following the demolition and construction necessitated by the 2011 earthquake.

At the launch of the project, Together! 2012’s Artistic Director Dr Ju Gosling said: “We are delighted to be working with  Queen Elizabeth Olympic Park to deliver this unusual and exciting project. Our instruments are made from a wide variety of recycled construction materials and found objects, ranging from an old bath and a leaky water butt, to a barbecue lid and old car wheels, to plastic drain pipes and old light fittings, to old fencing and empty containers. It’s encouraged all of us to look at the things we throw away in a different light, and we hope that it will make Park visitors think about the possibilities of so-called rubbish too. The project has underlined the fact that everyone can get involved in creating and playing instruments, and making music together, without needing lots of money – or indeed talent!”

More about the instruments 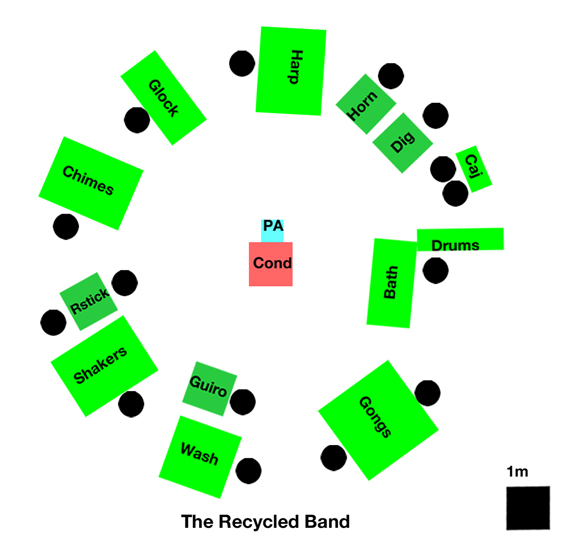 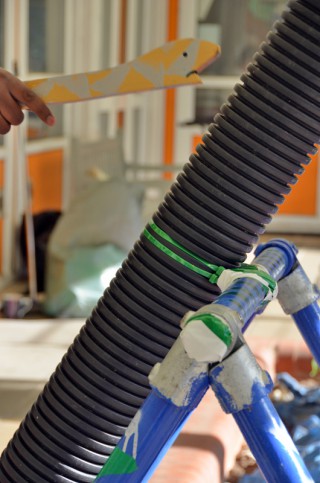 Guiro A length of ridged plastic ducting tube is kept upright by attaching it with cable ties to a scaffolding frame. It is played by running a wooden kitchen utensil up and down its ridges. 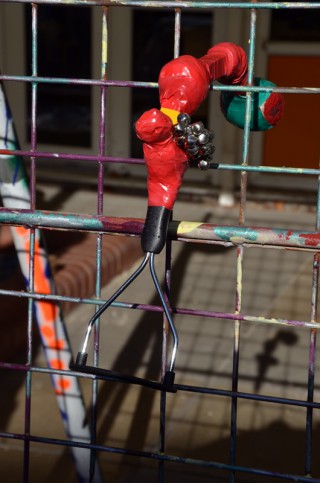 Washboard A metal meshed fencing panel is stood on its end and kept stable by attaching it with cable ties to a scaffolding frame. It is played with a ‘scraper’, made from attaching a plastic potato masher to the leg from a wheelchair ramp, with bells from a Xmas decoration attached to enhance the sound. A tennis ball at the opposite end of the scraper makes it easier to hold. 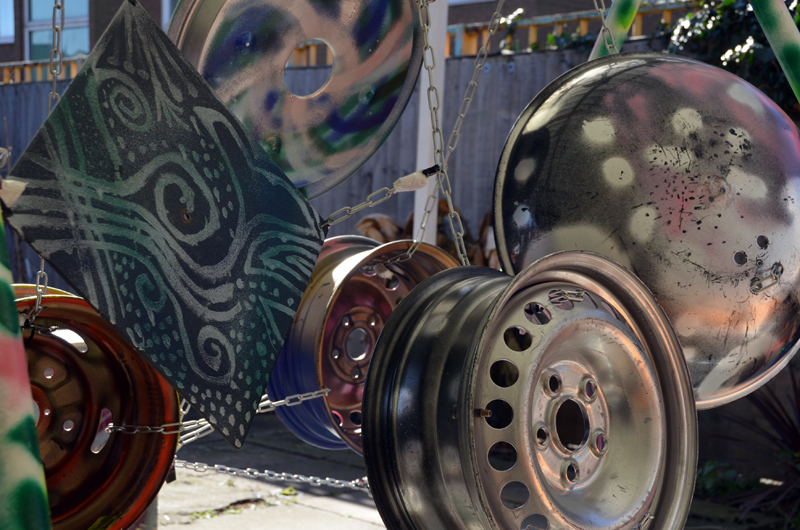 Gongs Made from three car wheels, a BBQ lid, a flag base and part of a light fitting, fixed with chains at varying heights to a scaffolding frame. These are played with a selection of wooden kitchen utensils. 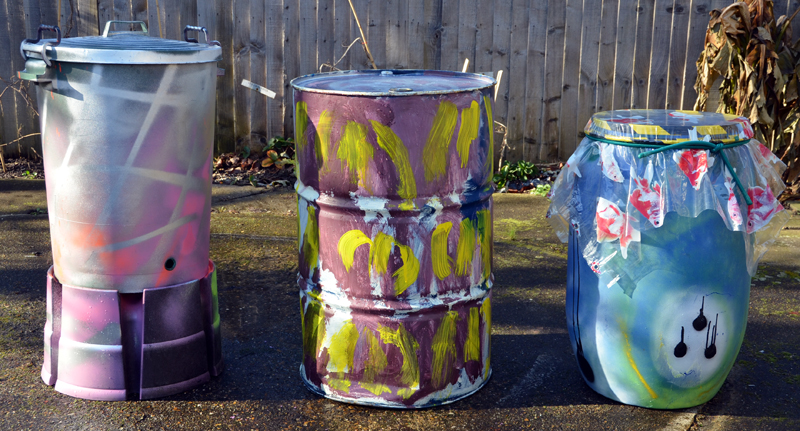 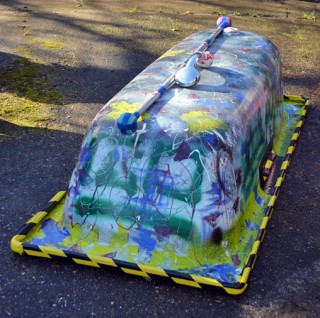 Drums Made from a leaky water butt; an upturned plastic container with a ‘skin’ made from an old shower curtain held in place by bungee cord; an old oil drum;  and an upturned metal bath. ‘Drum sticks’ of different lengths are made from attaching old tennis balls to a broom stick, shower head and light fitting, and by padding a wooden mallet. The plastic drums are kept stable by putting ballast inside them, made from mixing cement with gravel and leaving it to set in empty 10 litre paint cans. 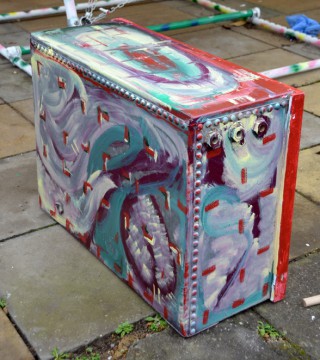 Cajon Made from an old zinc water tank turned upside down, with a flexible metal panel taken from a boiler set into a wooden frame at the front to create the playing surface. Players sit on the cajon and play the panel with their hands. 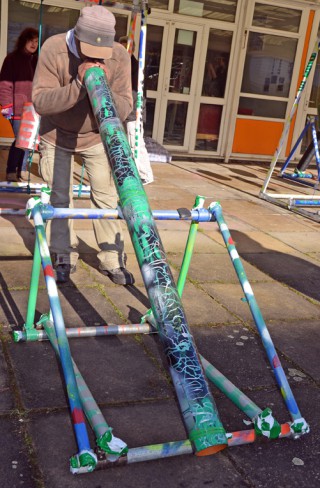 Didgeridoo A length of plastic piping is rested against a scaffolding frame and attached with cable ties. Simply hum into the top to start it resonating and amplifying the sound. The height of the mouthpiece is accessible to wheelchair users, and can be lowered further to accommodate young children. Adults can bend to play it, or use a chair to sit on. 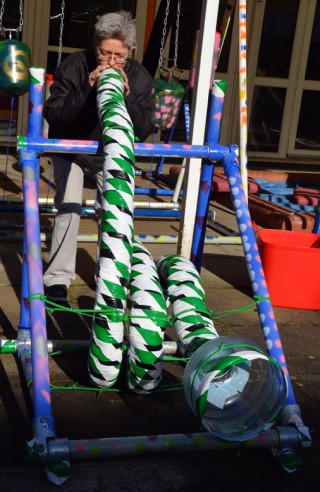 Horn A length of flexible round aluminimum ducting is wrapped in hazard tape and strengthened at each end with the inside of a plastic bottle. The bottom, amplifying end is made from a water cooler bottle with both ends sawn off. The horn is played by blowing a raspberry into a plastic bottle with its bottom cut off, which fits into the top of the horn (we have a supply of these bottomless bottles so that they can be sterilised between each use). The height of the mouthpiece is adjustable, and so is the frame it  is mounted on. 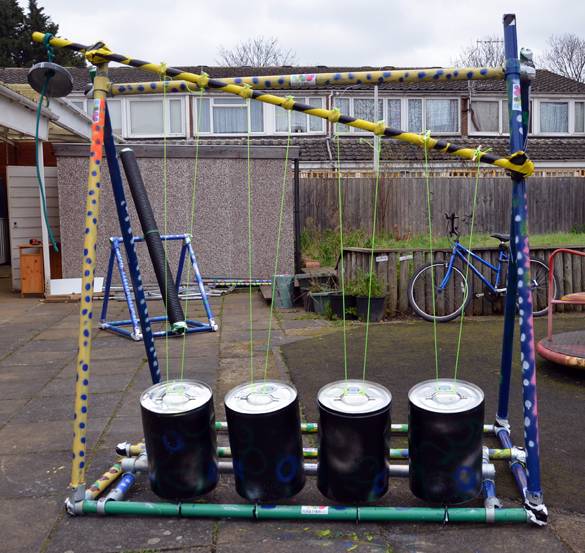 Bass Harp Based on a scaffolding frame, strings of different lengths are made from strimmer cord and tied in pairs to an empty cooking oil can to amplify the sound. Each string is attached to a pole running along the top by looping it in a figure of eight around a plastic cleat, and is tuned by loosening or tightening it at the cleat end. 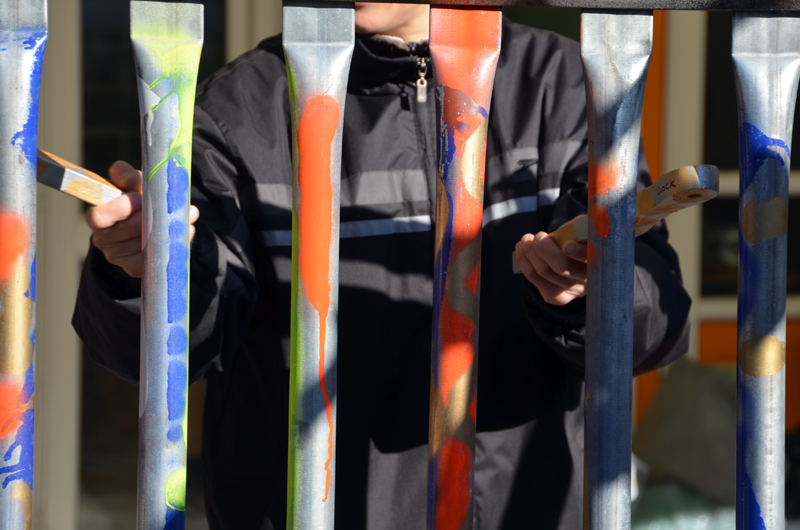 Glockenspiel Hollow metal fencing posts have been cut into different lengths, and are suspended from a metal fixing from an office cupboard, supported on a scaffolding frame. The Glock is played with wooden kitchen implements. 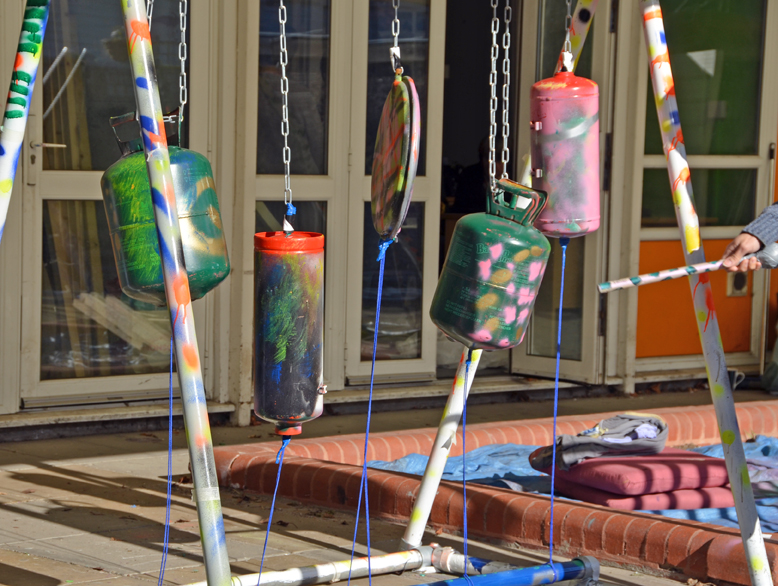 Chimes The chimes are made from empty fire extinguishers and gas bottles, suspended at varying heights from a scaffolding frame, and played with wooden kitchen implements of different lengths. 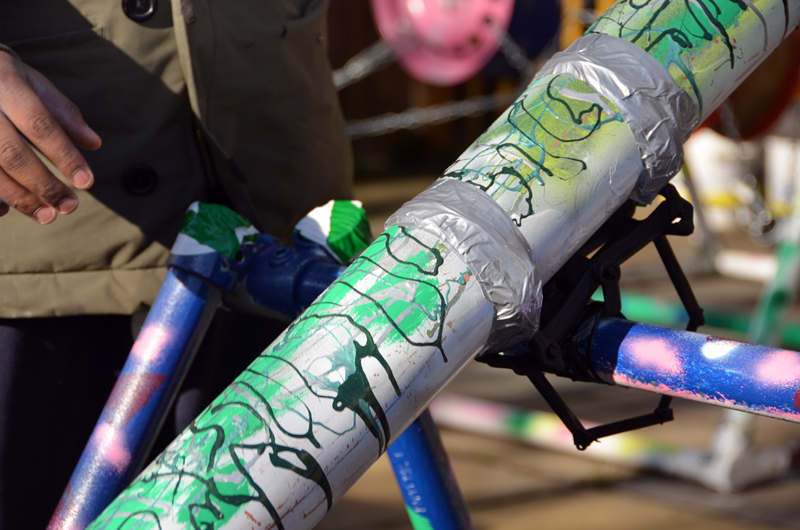 Rainstick The rainstick is made from a length of plastic piping, with a rubber bar mat pushed inside to narrow the middle. One end was filled with bottle tops, before both ends were sealed with a metal kitchen container that was cut in half. The rainstick is mounted on a ‘see saw’ made from metal kitchen scales, supported on a scaffolding frame. The sound is made by the bottle tops moving through the tube and hitting the tin at each end. As well as being played by tipping it like a seesaw, the scales can be played simply by moving the centre weight of the scales to change the equilibrium. 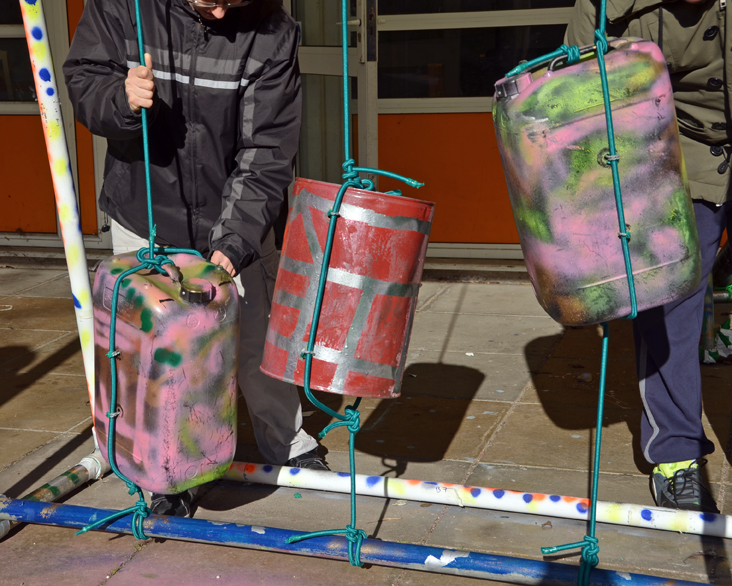 Shakers Made from empty plastic containers, and filled with a mixture of gravel and bottle tops, the shakers are suspended on bungee cord from a scaffolding frame. They can be played by picking up the containers, or just by pulling on the cord.

Special thanks go to Cliff Segree, Tracey Myers, Tae Catford, Sarah Hughes, Julie Newman, Carla Aveleira and the rest of the Together! team; Janice Weir, Dwain Bryan, Hamish Graham, James Rose, Leopold Loewer, Angus McKenzie-Davie, Jennifer Haydon, Ella Higginbottom, Dawn Barber and other members of the Together! Music and Art Clubs; Denise Holmes, Richard Lilley, Ella Tarratt, Zainab and Frances Pett from the McGrath Centre; the McGrath Makers; Powerhouse members; Elodiea, Drew, Steve and all the other PAs and support workers; Anna Godsiff, Emily Greaves, Adriana Marques, Rowan Longhurst,  Helen Holman and colleagues from LLDC; Brian Cleary and Richard Young from Sygma Safety; the stewards; the Park Champions, Jo, Kevin and all the other volunteers; East Twenty Bar & Kitchen, London City Metals, Taylor Wimpey, The Golden Fleece, The Hudson Bay, Forest Tavern, The Queen’s Pub Upton Park, The Red House; to all of the flytippers; – and to the McGrath Centre’s many close neighbours for their respect and forebearance as they watched the build take shape. 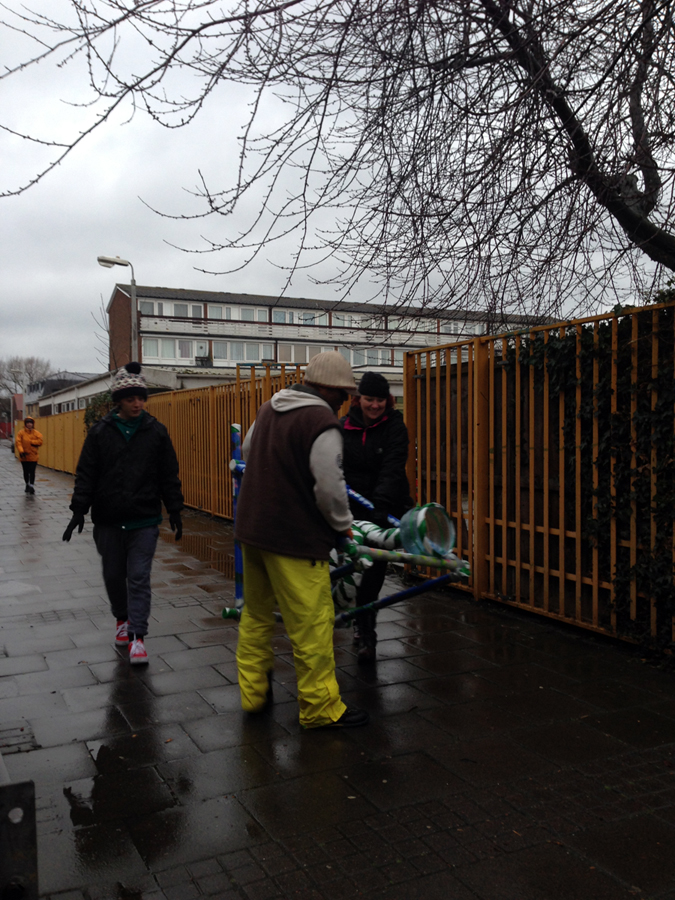 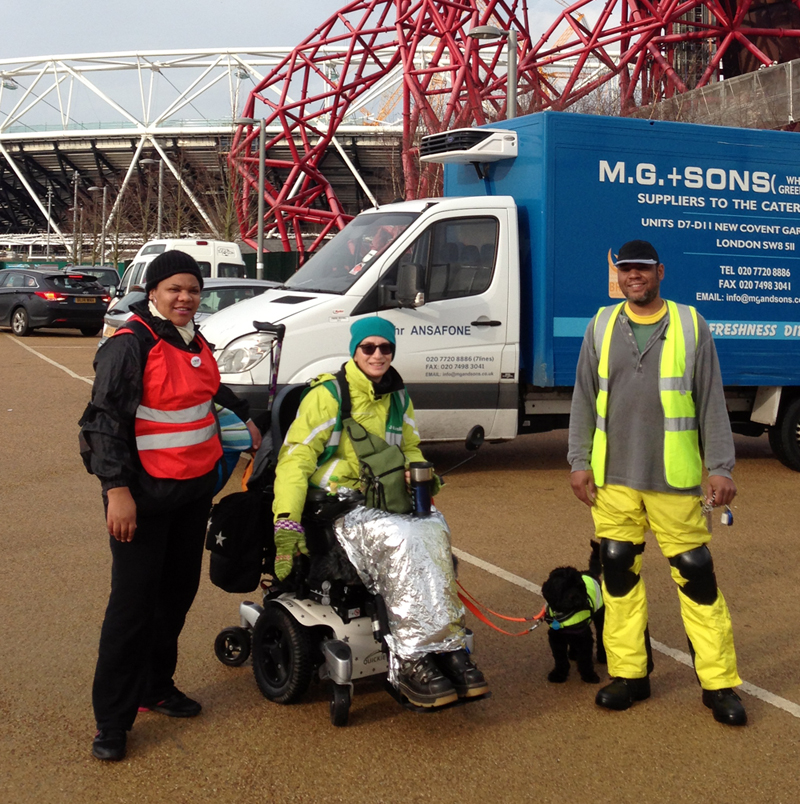 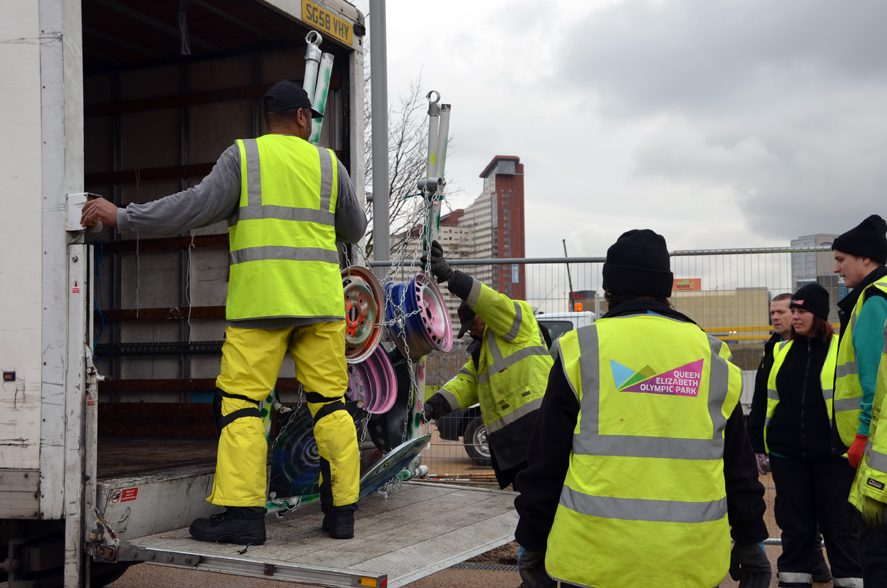 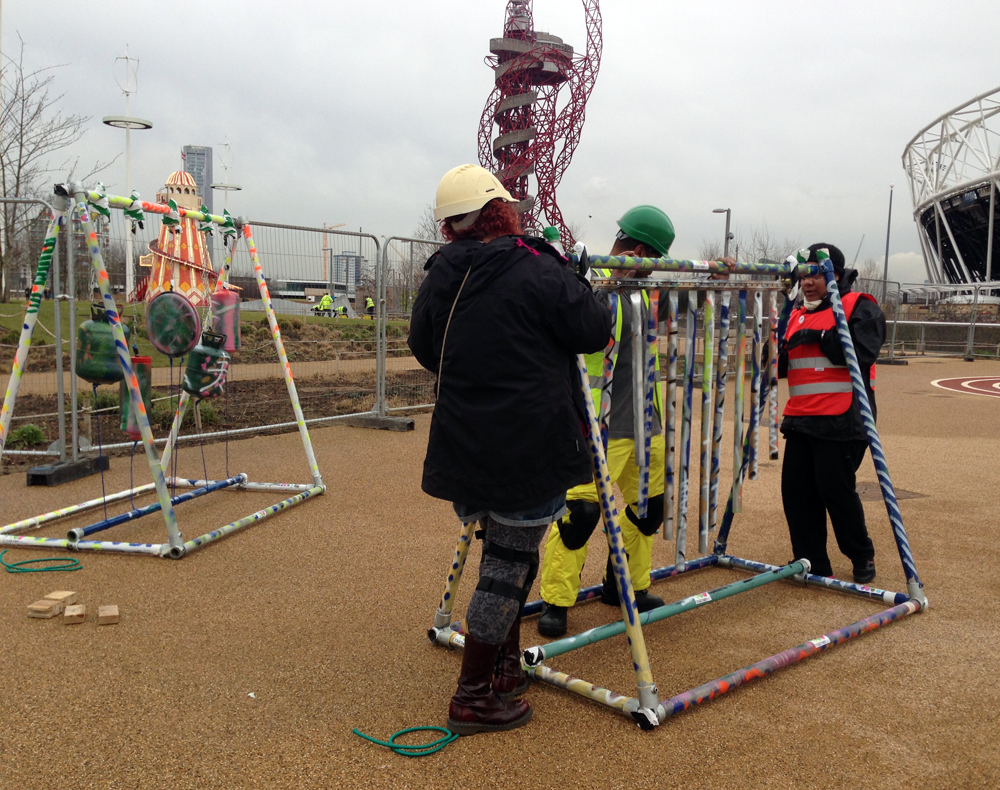 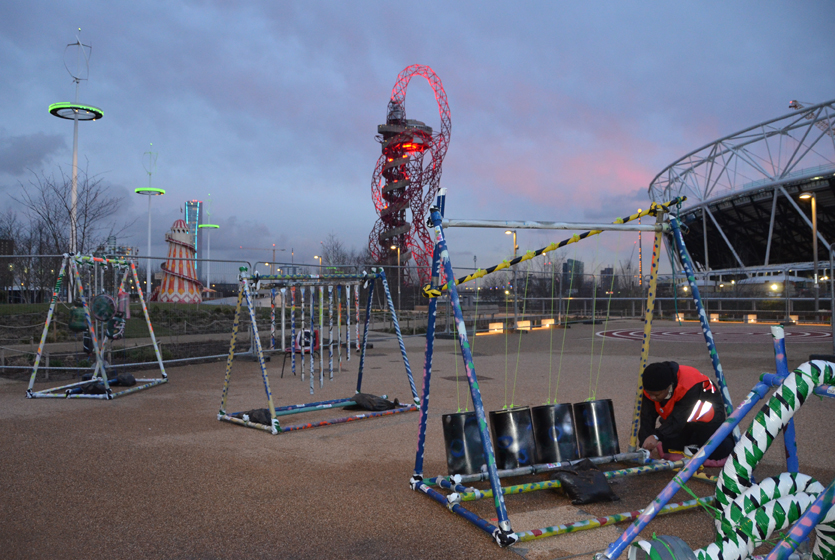 One thought on “The Recycled Band”