Vince Laws writes: At the start of 2021, during Covid lockdown, I needed a creative project to distract myself from the wider world. I’d been doing a lot of pet portraits, and felt ready to try human portraits again. I usually have three or four paintings on the go at various stages. Sometimes I hang them up on a wall and look at them for a week or more while I decide what the painting needs next. Often they get worse before they get better. I like oils because you can keep working until you get it right. You can even scrape the paint off and start again, which you can’t do with other types of paint. 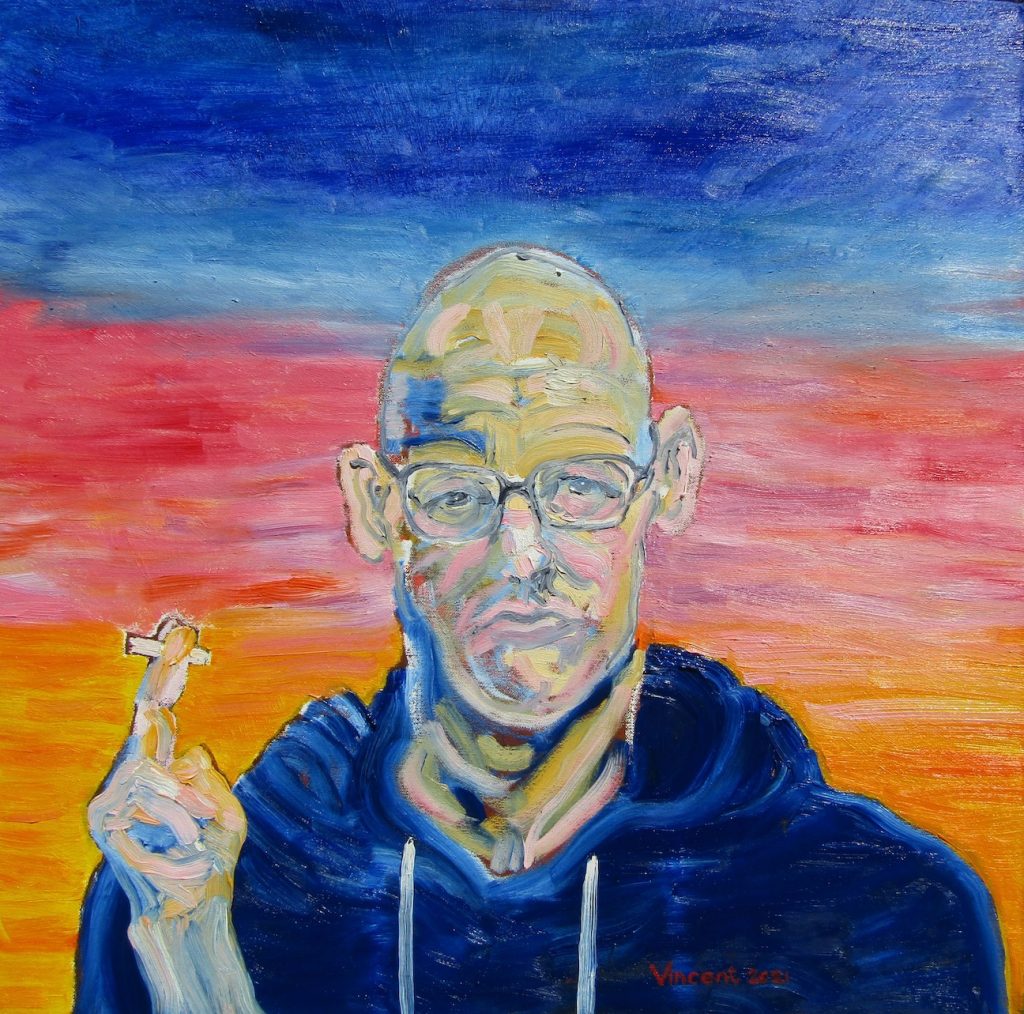 I sat down opposite a mirror and painted myself in a blue sweatshirt, to get my eye in. Quickly painted over a couple days, first my head and shoulders. I added in the hand holding a cigarette about a week later. I like the shape of the hand, it could be making the sign of the cross. At first the background was plain white, radiating from my head. Months later, when I was looking at Gauguin’s colours, I came back and livened up the background. 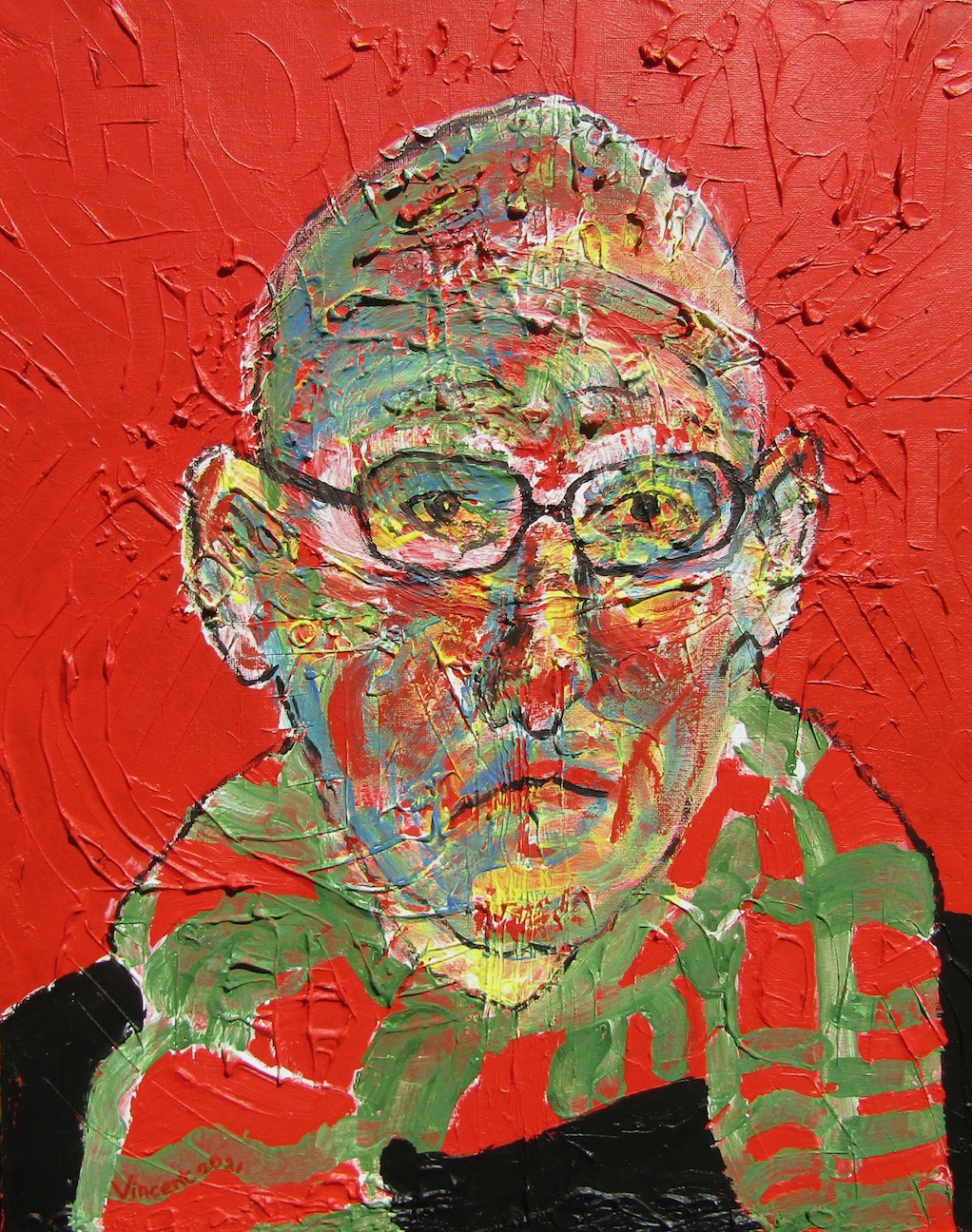 I wasn’t sure if I wanted to use oils, so next I sat opposite the mirror and painted myself using acrylics, which dries much quicker. Too quick. I looked at these first two paintings. In one I look neutral, but in the other I look miserable, not deliberately, that’s just me concentrating, but it reminded me that I’d done a series of self-portraits a few years earlier, and the close scrutiny and introspection had been detrimental to my mental health, so I needed to find a way to avoid that. 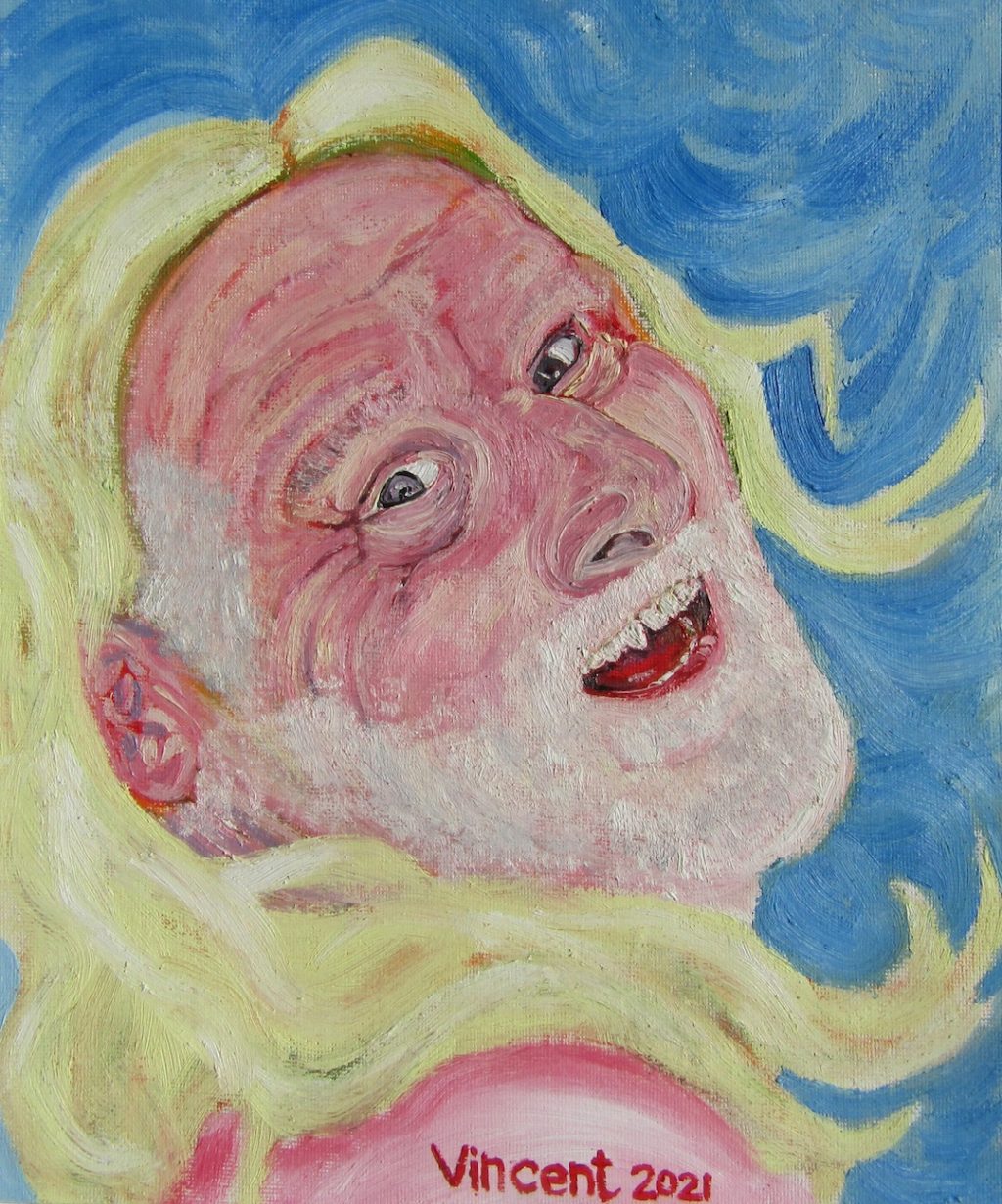 I decided to paint myself happy, laughing, in a long blonde wig. It was fun to take a photo and then paint from a photo. 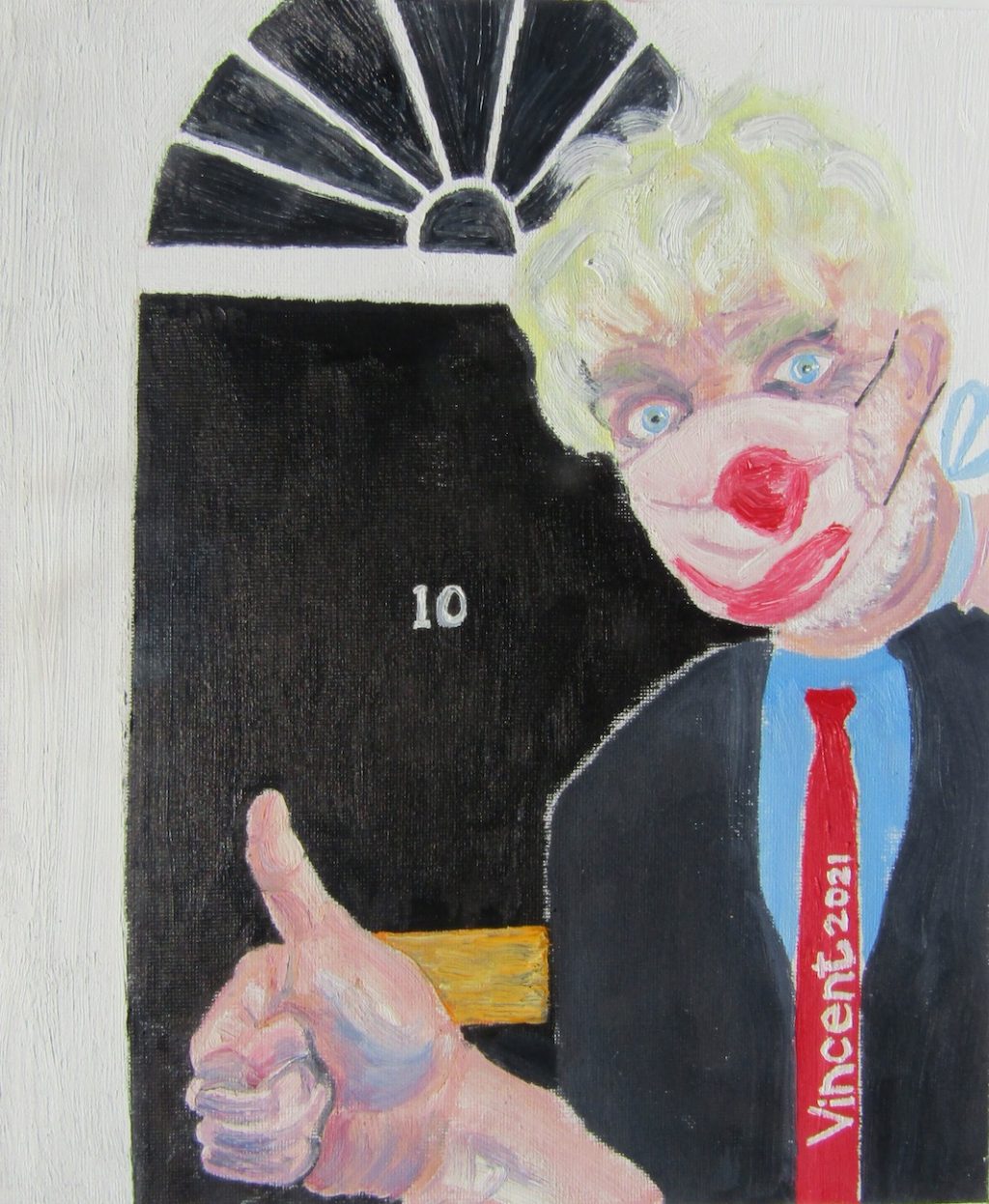 Next, I dressed up as Boris Piffle Johnson, a comedy alter ego. He wears a badly cut blonde wig, and a cardboard suit tied at the neck with a big blue bow. He’s outside number 10 Drowning Street doing a thumbs up. He wears a face mask with a clown nose and smile on it. It would be hard to take such a painting seriously, it amuses me to paint it, and to share it. Its very existence makes me chuckle. 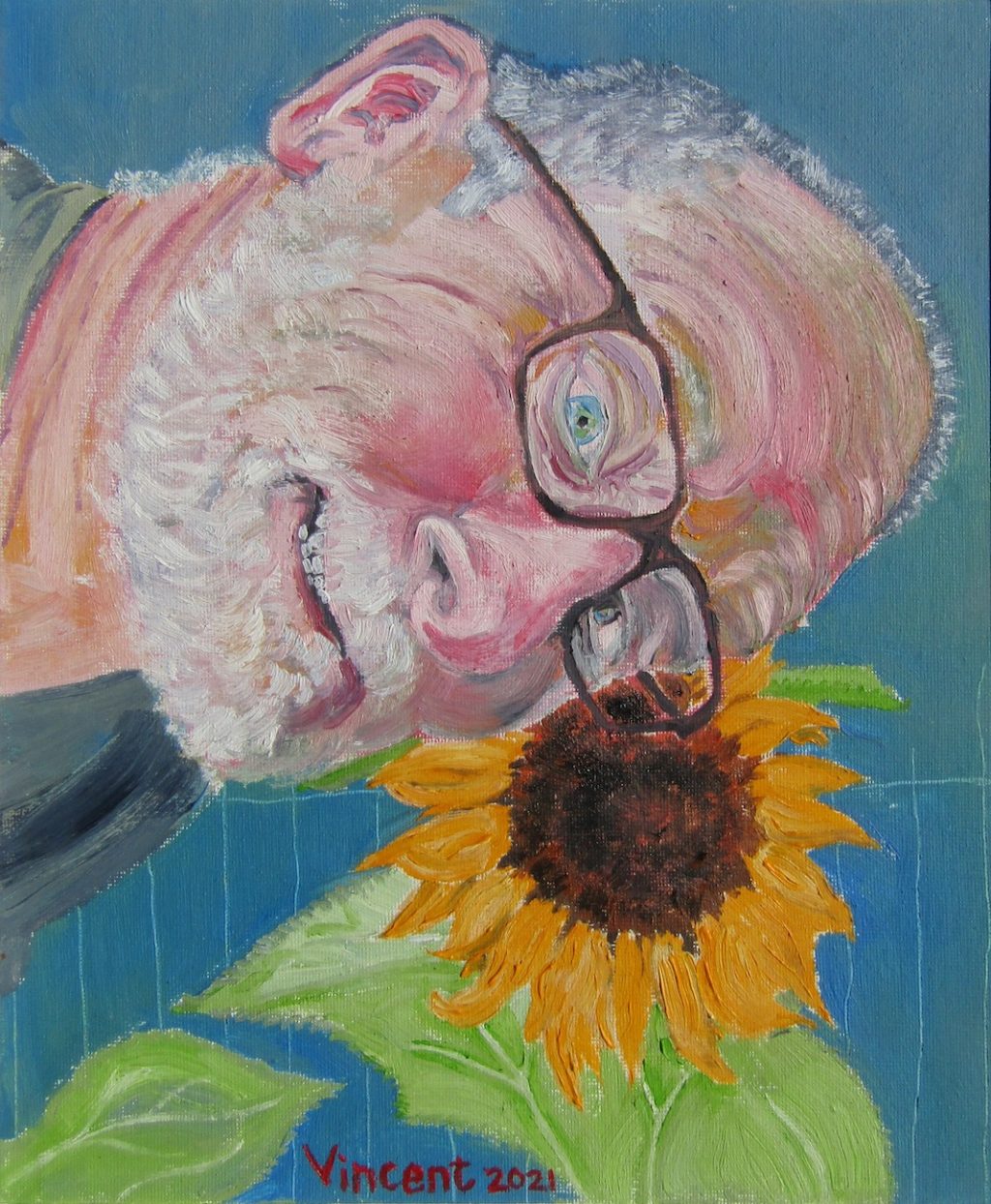 I have a photo of me leaning over and sniffing a sunflower and making a silly face, so it would be rude not to paint it. 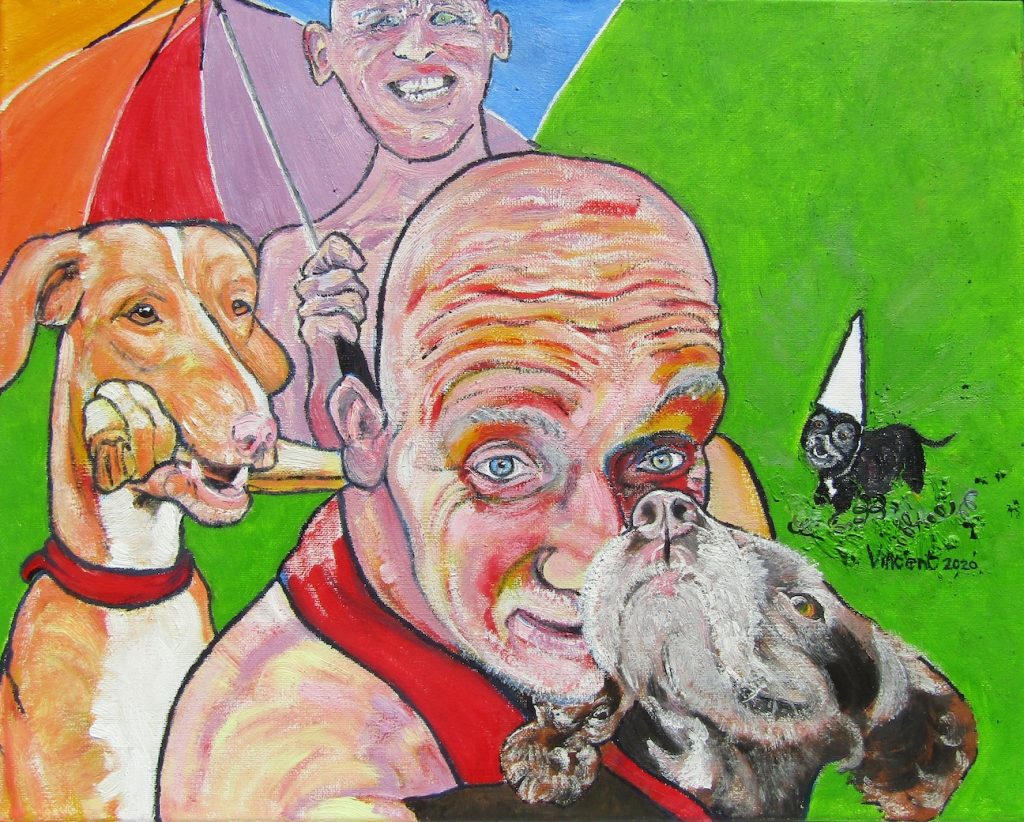 I wanted to do a family portrait of my family. Me, my partner Adrian holding a Pride umbrella, my dog Jessica holding a bone, and a neighbour’s dog that we see a lot of, Flute. Also there in the grass is Badger, no longer with us, but never forgotten. Some bits of silver glitter indicate his otherworldliness. 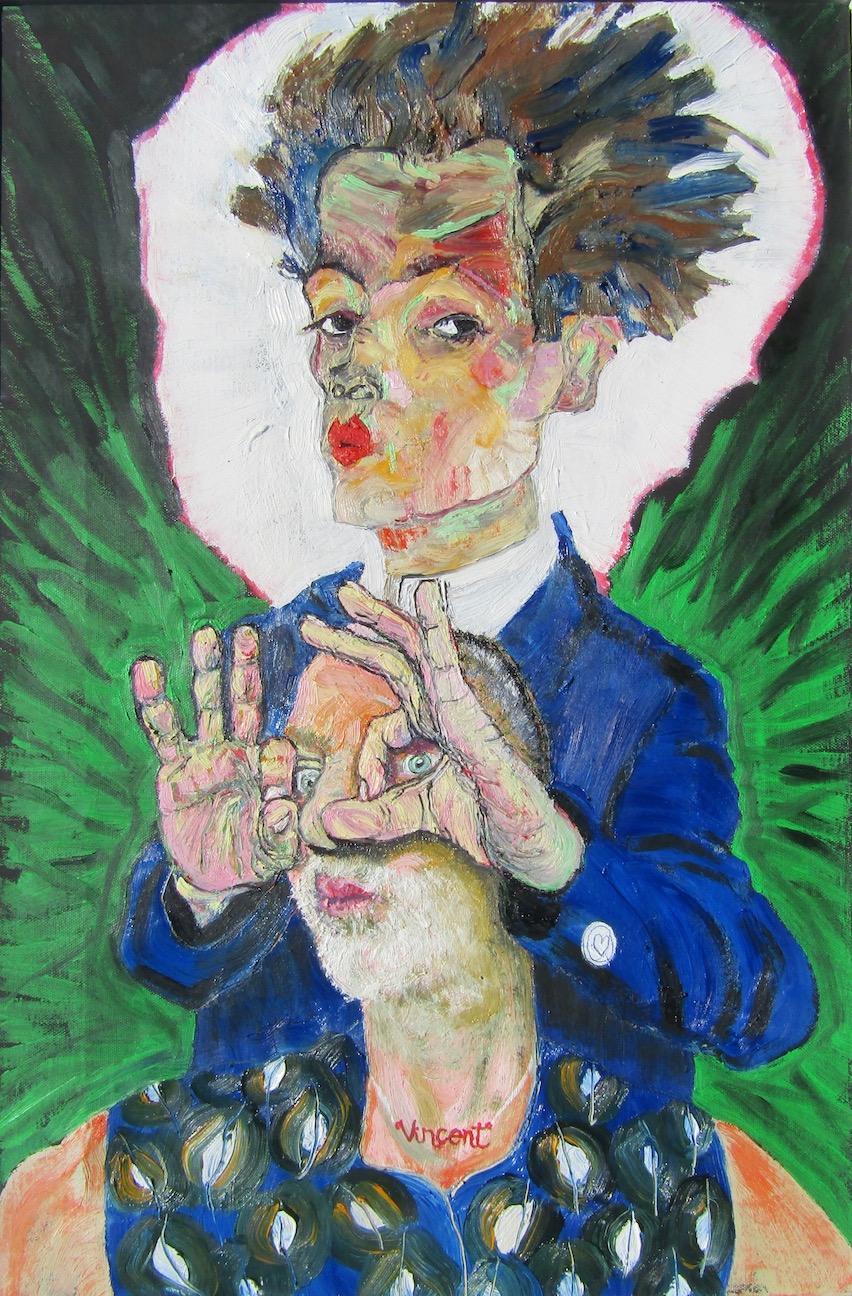 While I was painting self portraits, I was reading about self portraits, and artists who produced lots of them. Rembrandt, Van Gogh, Egon Schiele, among many others. I decided to see if I could reproduce Egon Schiele’s Self Portrait in a Peacock Waistcoat, and somehow include myself. It was a challenge trying to copy his colours in a different medium. I was using oil paint on canvas; he used gouache, watercolour and black crayon on paper. I painted him first, not sure how I would fit in. I thought his lips look pursed, so I pursed mine. I tried different hand positions and liked this best. Egon’s jacket could be a big blue wig on my head, his cuff button could be my earring. 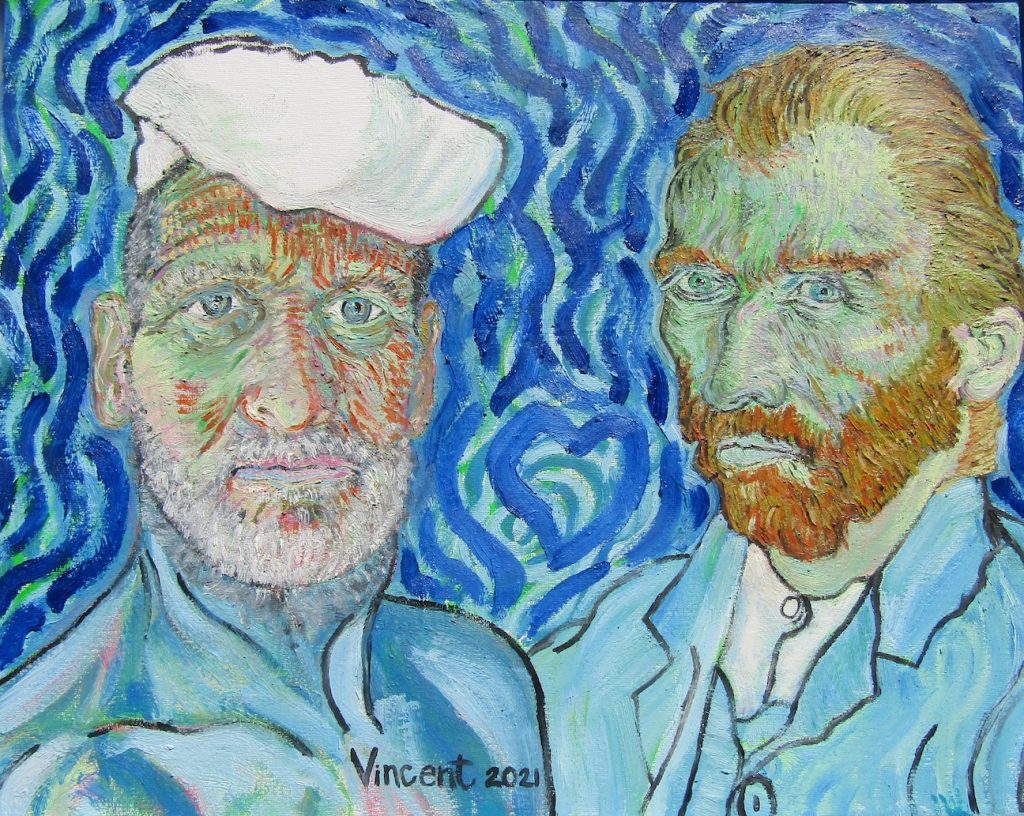 Next, I tried copying a Van Gogh self portrait. He is staring intently, so I found a photo of me doing the same, and tried to paint me in Van Gogh’s style. I look like I have a chef’s hat on, but actually it is a squashed milk container, and knowing that amuses me. 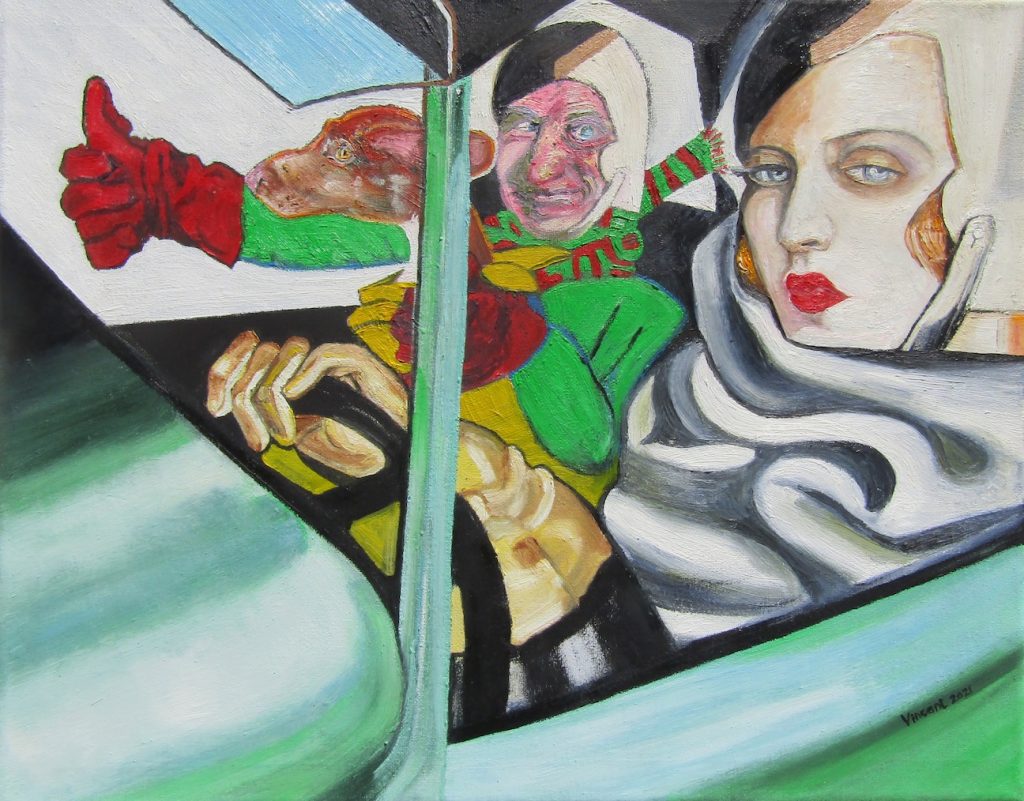 Suddenly I could see a whole series of me and my artistic heroes, their self portrait somehow interacting with my self portrait. Tamara de Lempicka had an interesting life, and in 1925 she was commissioned to paint the cover of a German fashion magazine, similar to Vogue. She painted herself driving a green Bugatti. Copying Tamara’s self portrait was a challenge. She creates such a highly polished finish, tones blended seamlessly. I had a lot of fun adding me into the passenger seat with Jessica on my knee. I’m wearing the same hat as Tamara, doing a thumbs up in massive red driving gauntlets. 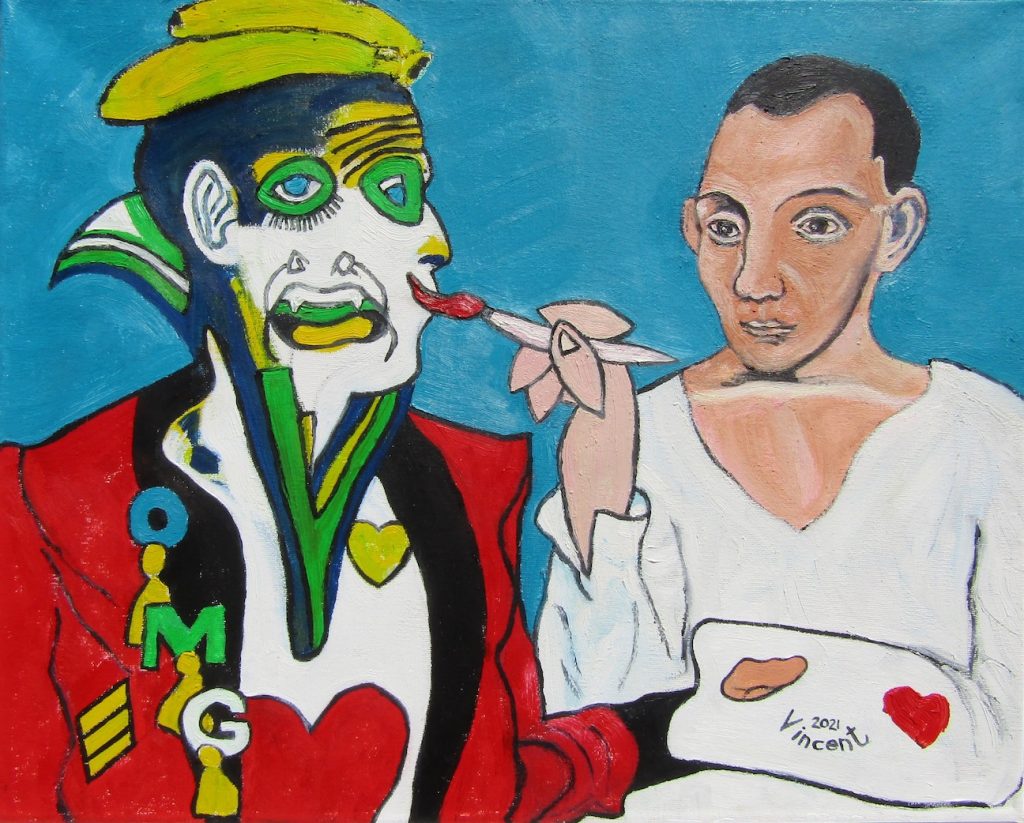 The idea of painting myself as Picasso might have done, amused and interested me. I copied his Woman in a Fish Hat to get my eye in. I like Picasso’s cubist hand, the red paint on his brush literally paints a smile onto my face. His sleeve become a palette I am holding. I’m wearing my red jacket with the OMG I got from a Queen. Bananas suited me better than fish. 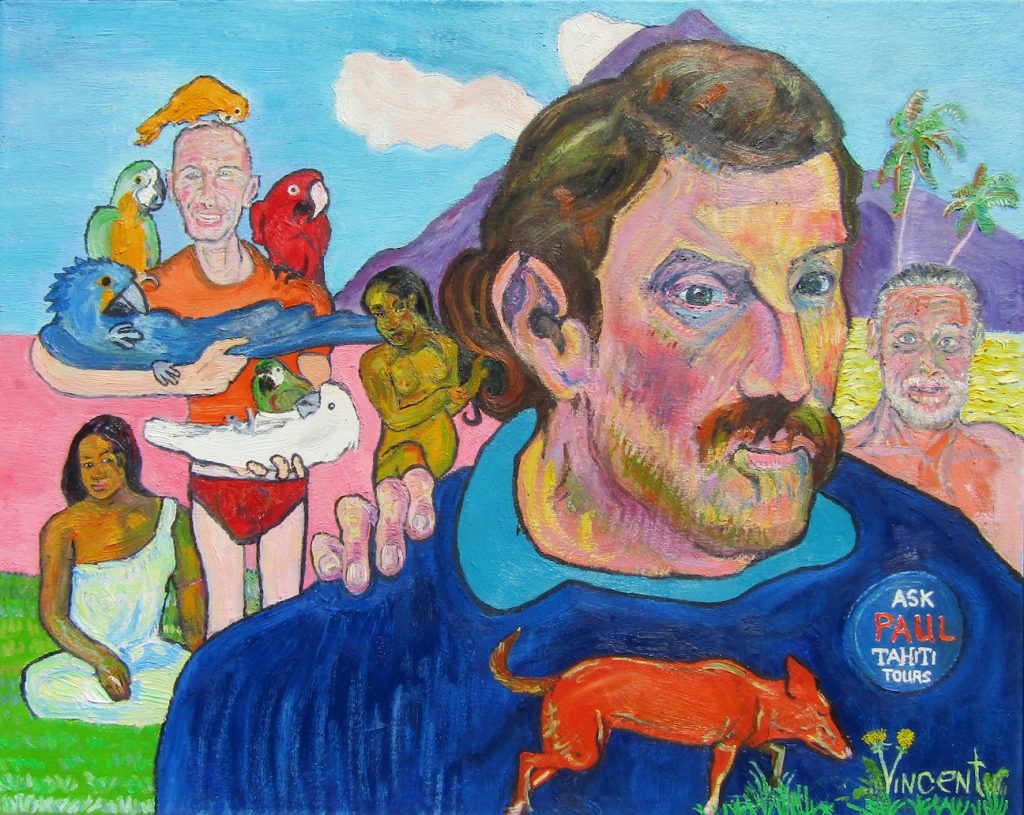 Next, Paul Gauguin. I copied his monumental self portrait. He could be carved out of rock. I decided to put him in Tahiti, and copied elements of his landscapes and colour palette. About that time Adrian found an old photo of himself with six parrots, which I thought would fit in with the tropical theme, and if he was going to Tahiti so was I. Gauguin became our tour guide. A couple of Tahitian beauties joined us. 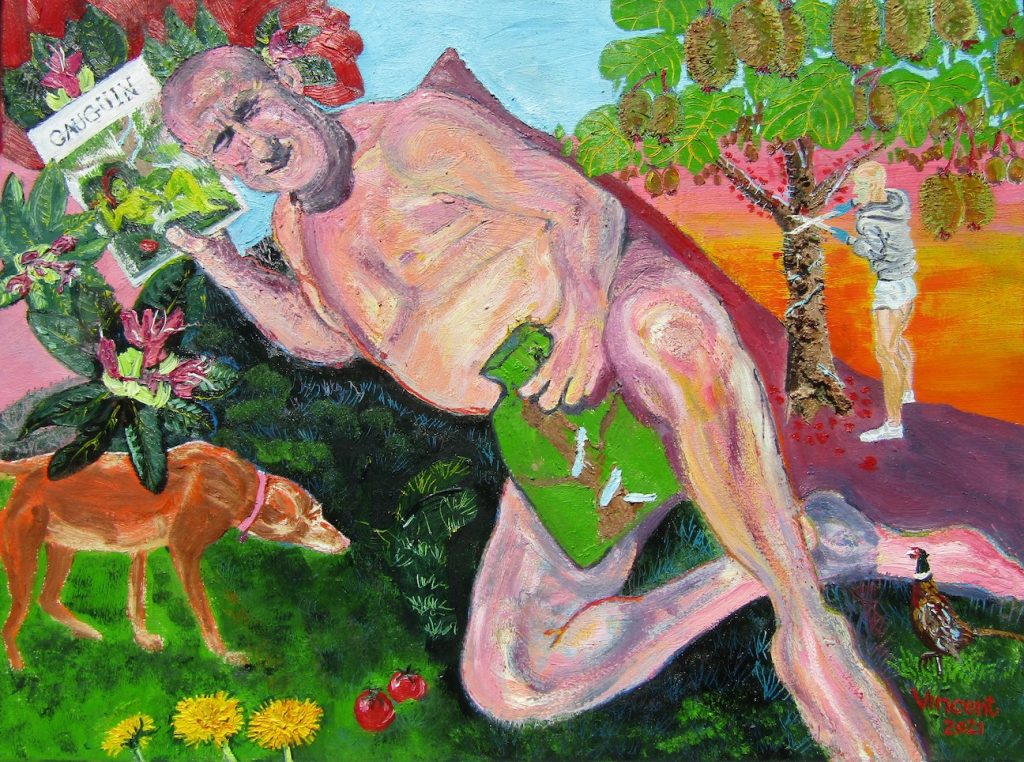 Talking of beauties, it amused me to paint myself naked, lying on the grass, like so many female portraits over the years. I copied the pose in Gauguin’s painting, Queen of Beauty. Instead of a fan, I hold a book about Gauguin behind my head. Instead of drapery, I have a hot water bottle covering my groin. Adrian’s there in the background pruning the kiwis. Jessica’s there stalking a cock pheasant. Symbolism darling. 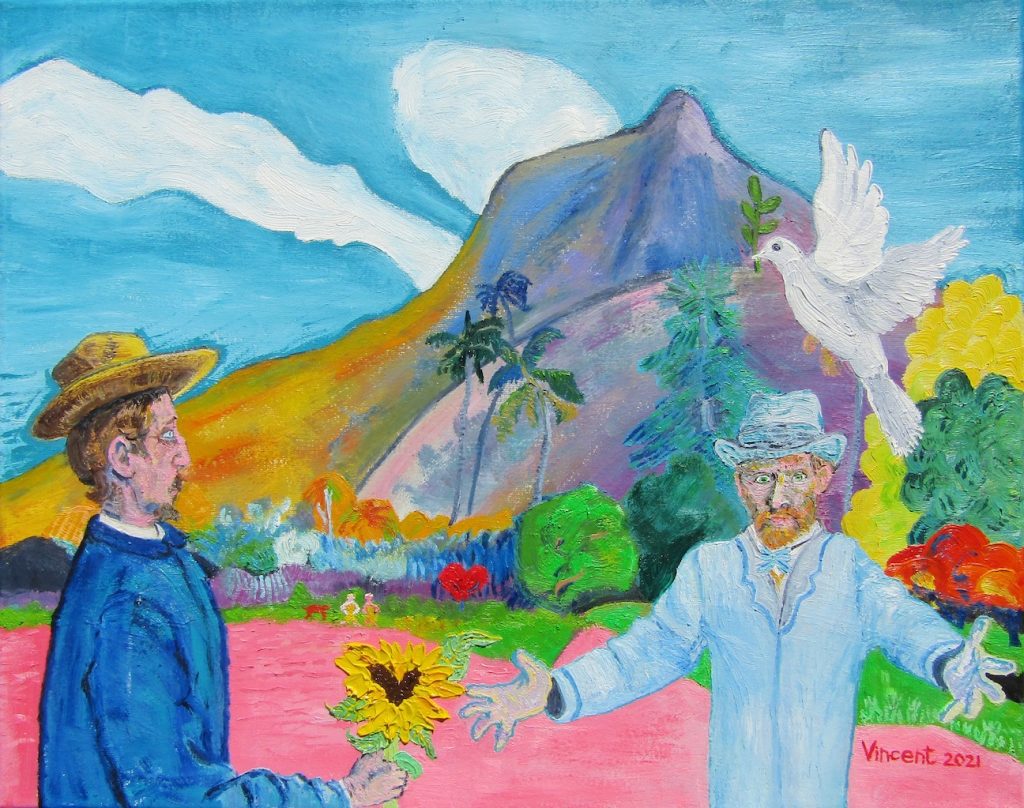 What if Gauguin and Van Gogh were alive today, and could meet up in Tahiti, knowing how successful their art had become? Me, Adrian and Jessica are there in the background watching this historic moment. Gauguin carries a sunflower with a heart shaped centre. A dove of peace descends above Van Gogh. Van Gogh’s wearing his best suit. 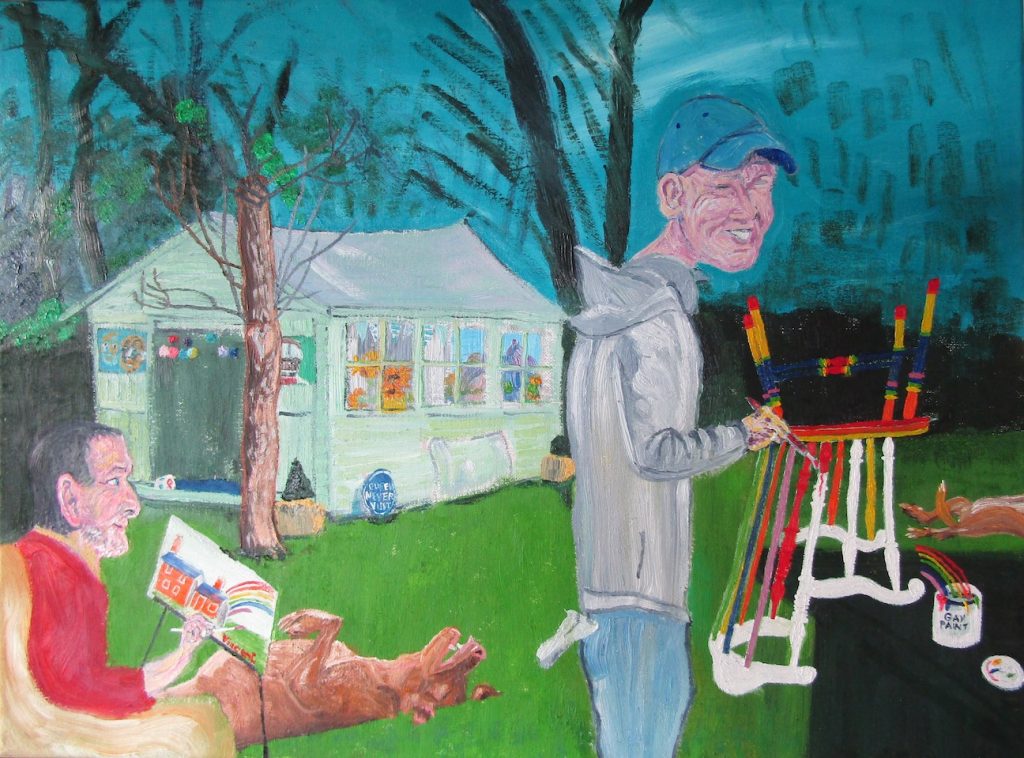 I was painting a lot and one day Adrian started painting too. He was painting a chair, so I painted him, with my studio in the background, and Jessica stretching out so long that she appears in both sides of the painting. 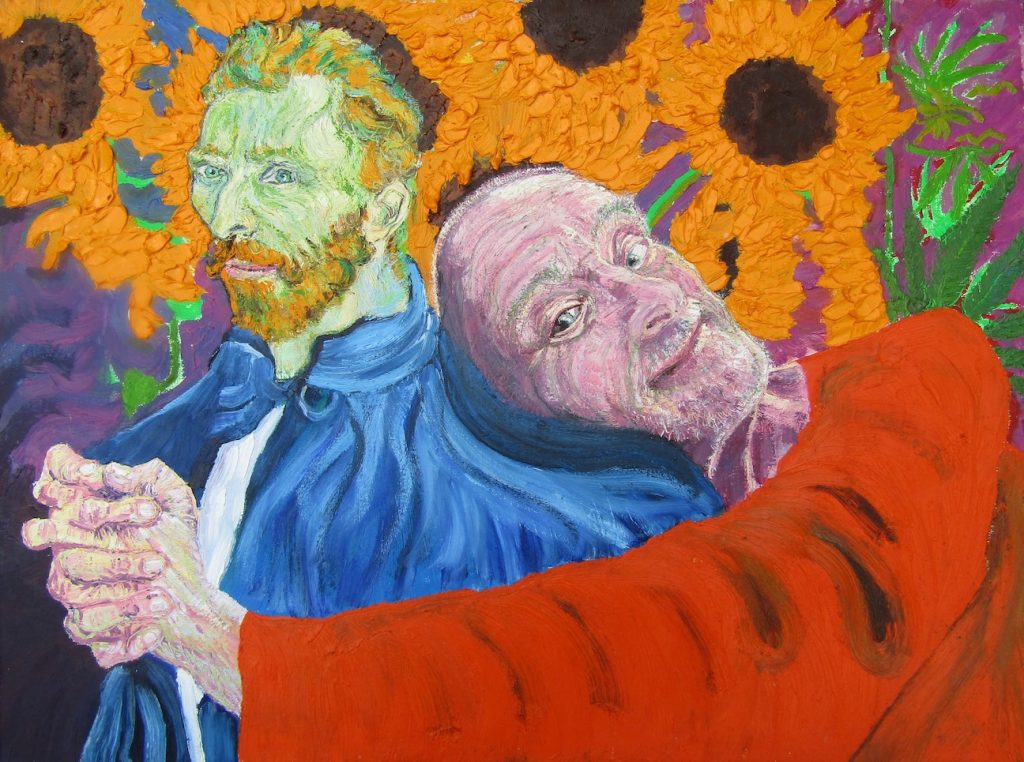 I started reading Van Gogh’s letters. At one point I just wanted to give him a hug. I’ve been painting sunflowers a lot, and of course he did too, so I’ve used sunflowers to give us both halos. I put more of a smile on his face than in his self-portrait. 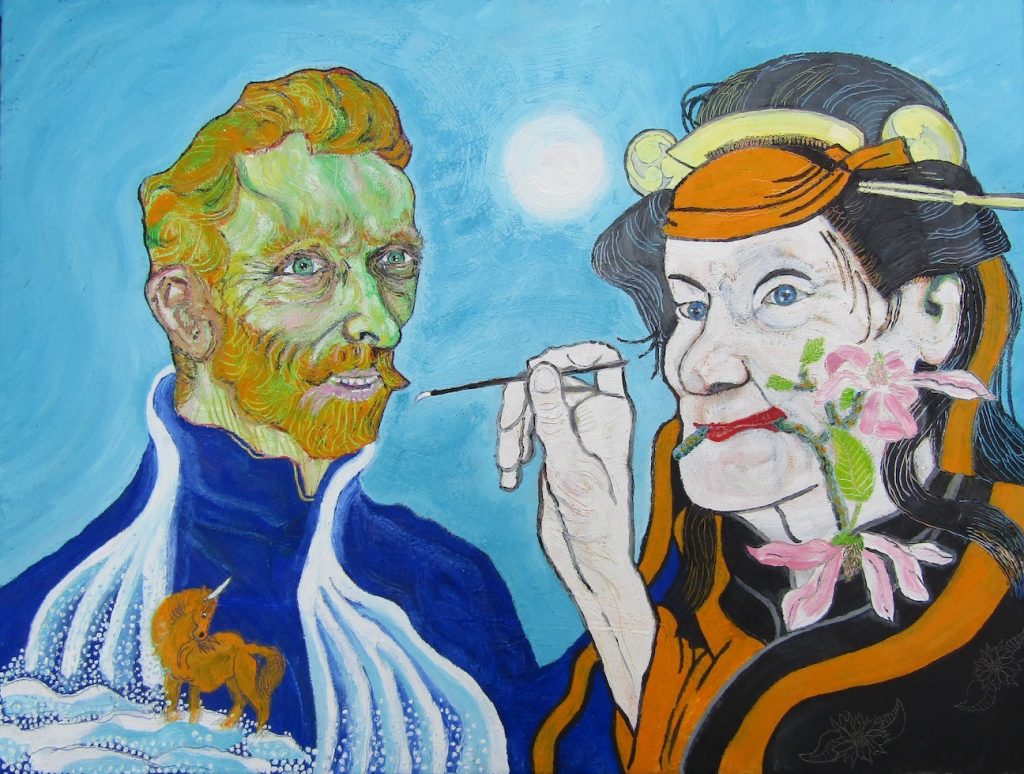 I read that Van Gogh tried not to smile because he had lost most of his teeth. That struck me as sad, and I decided to paint him with a smile on his face.

Click here to view images and text about how Making van Goph Smile was created.
Read my Disability Arts Online Blog (March 2021onwards) for more on this topic:
Click here to return to the Festival programme