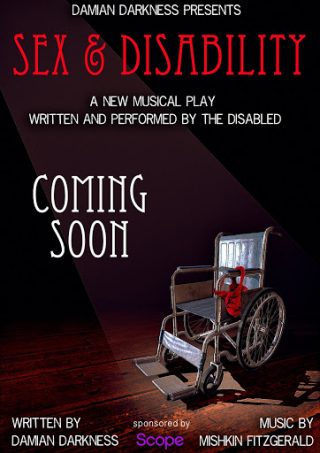 On World AIDS Day 1 December, playwrights Damian Darkness and Vince Laws were in conversation with Festival Director Dr Ju Gosling before their plays were streamed.

Sex and Disability is a play with music written by Damian Darkness, with music from Mishkin Fitzgerald. The play follows the story of a young man called Nick, disabled after a stroke at a young age, and struggling to make his way through the world of sex. Nick manages to enlist the help of his new carer Jasmine, a partnership which leads to exciting consequences. Sex and Disability aims to challenge perceptions and open a conversation about this subject, which is not tackled enough in mainstream society.

Damian Darkness is based in Brighton and his work is informed by his lived experience. This performance was filmed during the premiere at Purple Playhouse Theatre in Hove in November 2019.