Our monthly Music Club is one of our most popular year-round activities, but the highlight of each year is the Festival Music Club. In the past, we have invited nationally known disabled musicians to play during the Festival, continuing our practice of bringing mid-career artists to perform in intimate community settings. This year, however, as with the rest of the Festival, we wanted to showcase the talents of locally based disabled musicians from across impairment groups.

In order to support their performances, we also commissioned the mid-career artist Rona Topaz to provide one-to-one vocal coaching beforehand, as well as introducing them and performing herself. This followed a similar initiative in the summer. Rona is a highly experienced vocal coach as well as a singer, and has been able to teach our singers stagecraft along with vocal techniques. Together! 2012 has been pleased to support Rona through our Professional Development Club since her return to London, after caring responsibilities took her back to Scotland and forced a career break. Her own songs are well-written, wide-ranging and always delivered with panache and energy. 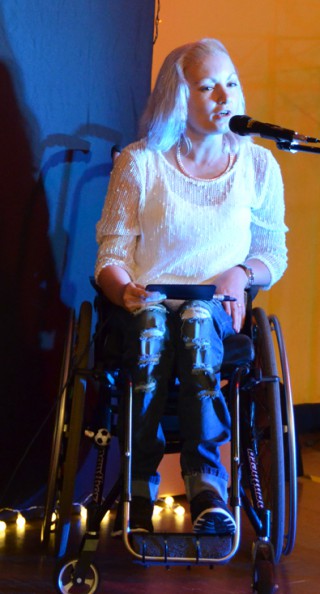 Roxana Stroe performing at the Together! Music Club on 2 December 2016.

Our first vocalist of the night, Roxana Stroe, had not performed in public until she joined the Music Club earlier this year. Roxana has a haunting voice and studied singing when she was growing up, but as well as being a wheelchair user lives with thrice-weekly dialysis, which has restricted her opportunities. Together! 2012 has been delighted to support Roxana’s professional development through the Music Club. Roxana was a major hit with the audience in our Liberty Festival tent at Queen Elizabeth Olympic Park on National Paralympic Day (3 December). Since then she has continued to develop rapidly, with a repertoire that includes songs by Tracy Chapman and Sinead O’Connor. Her set on Friday could not have been better received. We will be supporting Roxana to develop and record her own material in 2017.

Our second singer, Grace Fundu, is also a rapidly emerging artist. Grace has already appeared at the Festival, in Act Up! Newham’s play Outside the Box, and will be appearing at the end-of-Festival Party in a comedy sketch produced by Together! 2012 and directed by Natural Diversions. Grace’s first love is singing and rapping, though, and she did both on Friday to a very appreciative audience. Grace is proud to be out as a lesbian, and her rap called for wider acceptance of same-sex love.

Grace Fundu performs at the Together! Music Club on 2 December 2016.

Angus McKenzie Davie was our third locally based singer of the evening. Angus is a highly experienced artist with a background in dance and drama as well as music. A wheelchair user who lives with a neurological condition, Angus uses the difference in his voice creatively as he reworks songs by artists including David Bowie. Angus is also one of our more technical artists, and took over the sound mix as well after illness prevented our usual technical lead from being present. Illness also prevented our other advertised artists from appearing, but we intend to programme them on the next suitable occasion next year.

The Music Club always attracts a diverse audience and this was no exception. Disabled people from across impairment groups attended, including people with learning difficulties, people with mental health difficulties, people with physical and sensory impairments and people with long-term health conditions. The audience came from across the community, including Muslims, Christians and those of no faith at all, and all ages — we even had a great-grandmother, grandmother and great grandson present together. The Music Club is participatory, so everyone is able to select percussion instruments to play along, and we finished the evening with an Open Mike session which was also very popular.

The night reminded me very strongly of the late David Morris, who led on external inclusion for London 2012 and inspired Together! 2012. David’s artistic philosophy was to bring everyone together — emerging artists, mid-career artists and people who simply enjoyed joining in. After moving to Limehouse to be closer to work, he developed regular salons using the name Red Jesus, after the brightly painted statute on the roof of the church opposite his flat. A passionate supporter of live music, David frequently recorded his music sessions, and after his death we collected them here. I know that David would have loved the Festival Music Club, and that is always my ultimate test.

The Together! Music Club runs on the 1st Friday of each month (not January) at Vicarage Lane Community Centre, Govier Close, Stratford E15 4HW.

Next: International Day of Disabled People